I was just in one of the provinces that Thai people think of as small, far away, and poor, Sisaket, I’d never heard of it either until I was sent to teach a class here.

The hotel was a pleasant surprise. The first thing I heard about it was the price, 300 Baht, like $9 for a single. It wasn’t what I had pictured at all. I knew it would be clean, sheets and all, with a TV (all Thai) and air-con. It turned out to be immaculate, with a wonderful hot water shower, a huge bed with a good mattress, a nice new LG TV with cable, two channels in English, a small refrigerator, and lots of electrical outlets that work. The room was a little stark, like an undecorated movie set. (See pic) The whole outside is simply but beautifully landscaped. A strange touch, every single surface, inside and out, was perfectly finished and maintained, like it was Germany or something. I could live here. 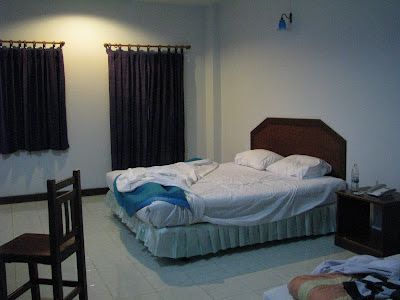 I went to the dining room for dinner about seven o’clock. I ordered Tom Yum Gai, a plain omelet, and white rice, I had some vodka in a water bottle, I got a bottle of soda water and some ice, I was all set. As I ate and watched TV, a Thai game show for young children, the contestants that is, I spoke with the help, a few of them were in and out, one or two were watching the show too. It was fun. I was mildly drunk. 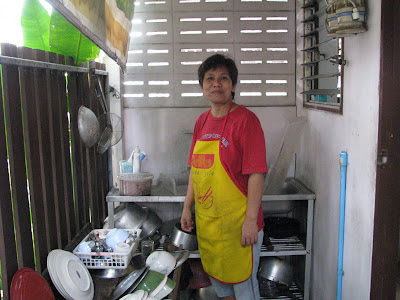 As I was finishing my meal, the cook (see pic) came out and she and a younger girl set a table for a meal. I didn’t notice, but they set a place for me. When I got up to leave, they said, hey, Ajan, please sit down. I graciously joined them and we all had a nice conversation about Sisaket, my university, where else I’d been in Thailand, my little northern town. I offered the two guys at the table a blast of the vodka, “lao kao Farang,” (Farang White Whiskey), they and the cook passes a small shot around and smelled it. I don’t think anyone drank it. Many Thai people are afraid of lao kao, which poor farmers make out of sticky rice and which before dilution can be as strong as Everclear, or Moonshine. Drink too much at 180 proof and the hang over lasts a week, unless you die.

The whole meal plus a couple of bottles of club soda and some ice to take back to the room came to three dollars. The warm welcome and the companionship were free. I love this country.

When I checked out, they provided transportation to the bus station, on the back of a fifteen-year-old, two-stroke Honda Nova.
Posted by fred c at 6:08 PM

As soon as I saw that kitchen I had flashbacks to our house in Phrae! Oh my, how I don't miss Thailand with too much poverty and all that blue pvc pipe everywhere. The cook looks like she can almost smile so that's always a good sign. Your hotel room does looks wonderful and maybe it was bankrolled by a German who oversaw the construction. Love, Ann of bananaland

This hotel is the only building in Thailand that a German couldn't find anything to complain about. All of the plumbing was in the wall, all orafices properly tiled and sealed, all surfaces flat, smooth, and well painted. It's a national treasure.