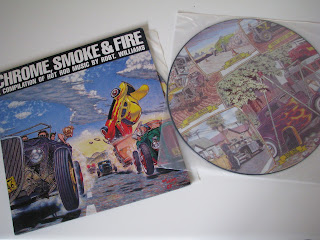 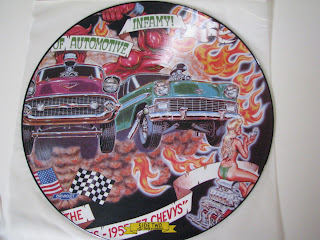 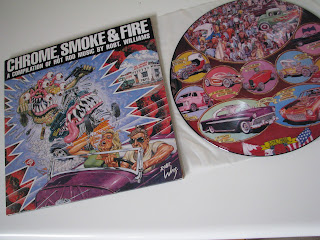 So I just got back from my annual trip to America.  I had only one thing that I really wanted to do on this trip, and that was to put some LP's onto a hard drive.  As so frequently happens, the Computer Gods had other ideas.

I did my homework before the trip.  I read about how-to, and researched the products that I found in the how-to articles.  I bought a new lap-top when I got there, I needed one anyway and the prices are about the same as Thailand.  I also bought the products and software that my research had led me to believe was 1) appropriate to the task; and 2) usable, i.e., susceptible of being figured out.  And oh, I tried it all every which way from Sunday and nothing, but nothing came even close to working as planned.

Don't think that I would take my own word for such a thing, no, I did consult an expert.  My son Keith is on very good terms with devices in general, and all things at the intersection of music and computers in particular.  He couldn't get anywhere with the stuff I was trying.  At the break point he said, "well, you could buy an Apple lap-top, I've got everything you need and the Apple comes with Garage Band," but by then it was too late.  I didn't want to spend the extra hundreds and hundreds of dollars anyway.

The pix are of one of my finer records, "Chrome, Smoke & Fire," a compilation of obscure old Hot Rod songs put together by Robert Williams.  That's his art all over the place.  I love Robert, and the songs are great.

To console myself I looked up the songs on the album on YouTube.  People tell me that almost everything is on the 'Tube these days.  I was skeptical, but sure enough, four out of every five songs on this two record set were on YouTube.  Some included amazing old footage of Hot Rods in Los Angeles.  Several had been up for many, many years with fewer than a thousand hits, that's how obscure the stuff is.

Believe me, I've got records that are more obscure than this one.  But I guess that YouTube has enough to hold me for a while.  At least until "they" pull the plug on all of this free fun we're having.  Does anyone expect that this Internet "free ride" will last forever?  Things that are too good to last, don't. 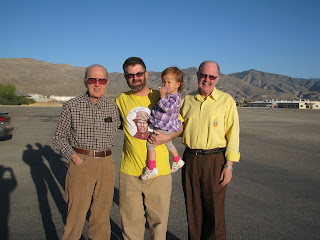 I think a nod of thanks to the moms that made this picture possible is in order.  So thanks to Hildagarde Braunstedter, Eileen Grady, Ann Suppe and Yuvi Kwok, top marks all around!

Jennifer, the little one, was a little bit taken aback the first time she saw my father and me together.  She looked back and forth between us, obviously thinking, so, there's two of you?

(Incidentally, I tried posting this pic to Facebook but couldn't get it together, how hopeless is that?)

I've been traveling, hence the long silences.  In a few days I'll be reporting back to the bunker with more time to write.  Thanks for visiting, and I'll talk to you soon.
Posted by fred c at 8:43 AM No comments:

I've really been enjoying the soap opera that is modern Catholicism.  It looks like it will continue to be interesting.

We have a new pope, to go with the old one (one could be forgiven to observe).  Part of the fun over the last week or so was the speculation all around as to whether the church would choose this kind of pope or that kind of pope.  As if there were really any mystery about it.  They are in trouble, have been for years, image-trouble, numbers-trouble, legal-trouble, so of course, I figured, they'll pick someone to lead a close circling of the wagons.  They did too, they picked a Jesuit.

Yes, a Jesuit, a soldier in the "Army of God."  Then, in a brilliant P.R. move, having picked a wolf to lead the church, they immediately clothed him in a suit of sheep's clothing in the form of his name, Francis, the most un-Jesuit name there is.

So St. Francis will be the face above the table, while the stiletto will remain hidden under the table.

Let's see how this thing goes.
Posted by fred c at 4:57 PM No comments:

Adrian Belew I Am What I Am

Support is overwhelming for two propositions that in the past would have been considered non-starters:  gay marriage and the legalization of weed.  This is the case because we’ve learned a lot over the course of the last fifty years.

These are not the most pressing issues facing us today, Lord knows, but they are, at least, two issues for which the light of understanding has reached almost all of the corners.  That understanding has led to an almost universal modern reaction.  Legalize marijuana?  Allow homosexuals to get married?  Why not, and why not?  What’s the big deal?

There was a pre-criminalization period during which no one seemed to take much notice of marijuana products.  So called “patent medicines” commonly included tinctures of cannabis.  Something happened, and there followed a long period of marijuana prohibition.  The general lack of knowledge about marijuana allowed propaganda like “Reefer Madness” to be accepted as possibly true.  Grass started to become more generally available after World War II.  The Robert Mitchum bust and Beatnik involvement made the news, but I can tell you that the urban hooligans of the period were no strangers to the weed either.  The Summer of Love made every teenager in the world go looking for reefer, and market demand was met, in Spades.  The early ‘70’s brought victory, and since that time it has been easy to purchase, pretty much anywhere.

We, people currently alive, all know, or have known,  people who smoke, from casual smokers to dedicated connoisseurs.  Most of us know people who have been smoking the stuff for many decades.  It doesn’t seem to do them much harm.  Doesn’t seem to make people angry or to lead to accidents; it hasn’t been associated with illness.  We know this from our own personal experience.  So it’s not a big deal anymore.  Why not legalize it?  Go for the tax money?

It’s even a more glaring revelation with homosexuals.  Up to the early ‘70’s people had no information about homosexuals, those guys and girls had their heads so far down in their collars that they were virtually invisible.  Then it changed.

One family that I know very well had ten brothers and sisters, all born in the 1920’s.  Most of the boys were huge and tough, this was in Queens, New York City.  One of the boys though, one of the older boys, was the quiet type.  He served in the war, in the Army, and worked for Consolidated Edison for the rest of his working life.  He was a little on the giggly side, and he never moved out of his mother’s house.  He never married, in fact he never seemed to have had a date with a woman (or anybody else either).  There wasn’t even any speculation as to his sexual orientation until after he died (at the age of 64).  Then maybe a niece or nephew would speculate that he might have been gay.

That’s the way it was, gays were INVISIBLE.  I went to a Catholic high school in the early ‘60’s, there were over a thousand students, all boys.  Looking back, it’s strange, I have no idea who the gay kids where.  If statistics mean anything, there must have been dozens and dozens of them.  Even in retrospect, there’s maybe two guys that I wonder about.  The rest of them had really great disguises.

Then came the Hippies and the free love thing and it was the beginning of people casually coming out.  It was almost shocking, not the simple fact that they were homosexual but the admirable, fact-based attitude that they had about it.  In the early ‘70’s the Stonewall Incident in New York City led quickly to gays becoming more and more visible.  More homosexuals took the fact-based route, as if to say, this is me honey, and I don’t have a problem with it.

The result was that Americans gradually learned that we all have homosexuals, men and women, in our families.  We all work with them, we all went to school with them, we all have gay friends.  And the natural lesson of this was that gay people are, more or less, reasonable, responsible people, like anybody else, except perhaps better dressed.  So here too, the response is, “what’s the big deal?”  We get it now, we’ve been educated.

So now that we have achieved the certain knowledge that these two things are not as threatening as was once believed, people feel comfortable backing legalization for weed and freedom for homosexuals to marry.  Now can we please get all the way past these things, get the necessary legislation in place, and move on to other problems?  There’s no shortage of serious matters that require our attention.