Thanks, Your Majesty, But Baby Needs a New Pair of Shoes 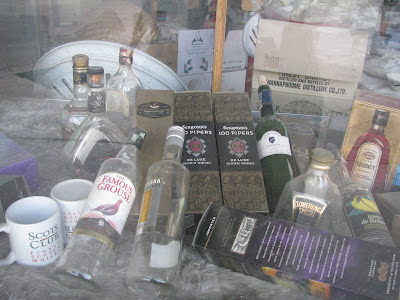 My hotel in Ubon was the Regent Palace, quite the grand name for a slightly down in heel establishment. Look for the good though, I always do: very close there is a Seven-Eleven, an Internet-café, a Pizza Company, and a semi-full-service liquor store. The liquor store was very interesting.
The law here, at the request of the King, who thinks Thais drink too much, is no alcohol sales during certain hours, including two to five pm. Well it was after two but that didn't seem to bother the proprietor. The King, after all, is very far away.

She, the proprietor, had a good selection of vodka, unusual in a small, out of the way liquor store. Everything from too-cheap-to-drink to Absolut. And quite the little selection of wine, too. Nothing too expensive, some from Chile, some Australia, some Italian or Spanish, up to the California’s a some good French wine. Not every wine bottle had a price on it, she wanted to retain some flexibility. I picked up a bottle of French and she said, 390 Baht, me being Farang and all. I turned it around and she was hoisted on her own petard, there was a price on it, 295 Baht. She recovered nicely.

I took a bottle of Starnovich, vodka made in France, the best bargain vodka in Asia in my experience, which is considerable and growing.

The “show windows” were most interesting, all decorated, or littered is more apt, with empty liquor and wine bottles. See Picture.
Posted by fred c at 11:26 PM