Are You Awake? We Must Leave Now 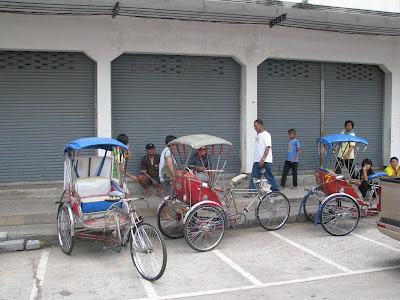 I woke up in Sisaket this morning, had set my (telephone) alarm for seven, I don’t teach until one p.m. The last time I traveled I was picket up about eleven o’clock. I needed a couple of things, a disposable razor, shampoo, a pre-paid phone card, a cup of coffee, so I set forth.

Through sheerest serendipity, a three-wheeled-bicycle-taxi was just dropping off at the hotel. “I need to go to a market,” I offered, he gave me a quizzical look. All of the little mini-marts sell pre-paid phone cards, so I ventured, “I need a One-Two-Call card,” and showed him my telephone. “Seven-Eleven, ok.”

He seemed to get that, and we set off after agreeing on a price. I knew that there was a Seven-Eleven not too far away, straight down the road, yesterday I was thinking, I could almost walk here. We rode zigzag through all of the streets of Sisaket and when he came to a (closed) telephone store he pointed and said something, I don’t know what. I was having fun and seeing a lot of the little city so I just smiled. He continued on and stopped at another phone store that was open.

I bought the card and had an enjoyable semi-conversation with two women who were amazed that I could speak even a little, horrible sounding Thai, and then explained to the guy that I still needed to go to a dalat, a market, he shook his head and asked the women what the hell I had just said. They’d gotten it and told him to take me to a Seven-Eleven.

At the Seven-Eleven my phone rang, it was Professor Kamtorn, he’s also here to teach, yesterday we flew in together. “Did you wake up yet?” Sure, I’m in town shopping. “Oh, we must leave now.” I’ll be back in ten minutes or so, he seemed to think that was too long. The last time this happen to me, the bus was in the act of leaving the hotel and I was sleeping.

When I got back I explained that I would need a half-hour to shower, shave and get dressed, “I can get coffee and some breakfast at school.”

“But we must leave now.”

“I’ll catch up with you later,” I smiled.

“But how will you get to school.”

“Maybe they (the staff) can call me a car, or maybe by taxi-motorcycle.” As soon as I would tell them that two hundred Baht was involved, they would be on the phone and someone would show up with a pick-up truck and a big smile, their brother, or boy friend.

Of course when Kamtorn spoke to the driver it was a simple matter for the driver to come back for me at noon. “Thanks, sorry for the inconvenience.”

I am somewhat accustomed to the suddenness with which things happen in Thailand, with the utter disinclination to plan anything or compare notes. But I still don’t like it.
Posted by fred c at 6:18 PM