The Vietnamese Monk In Thailand 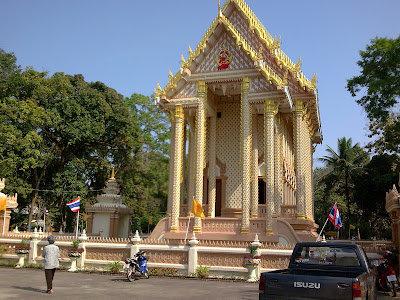 This week I was in Sakon Nakorn for a couple of days of R’n’R before teaching a class in neighboring Nakon Panom. I rode around town in bicycle taxis, shopped here and there, passed on eating dog (which is available at some restaurants and markets here), and visited the two temples that were recommended in the guide book. One of them was a kind of museum to a famous dead Phra Ajan (“Monk Teacher”).

It was very nice. The museum part was a modern building with bio’s and artifacts, lots of daily-use items, including spittoons, all very simple but belonging to the monk. It’s still a teaching-temple. I got there in the middle of a day-long series of outdoor lectures by the current teaching monk. All of the participants were dressed all in white and sat respectfully in a deeply shaded grove. The place was beautifully landscaped.

One very friendly monk came over to talk to me and my guide on this occasion. He was very chatty, speaking almost non-stop in Thai and fair English. He was seventy-two years old, he stood about 5’ 2.” He said some very surprising things. He said he had some special medicine that would enable him to live 1,000 years, I wished him good luck with that.

He also praised communism and suggested that what Thailand really needed was communism. He highly praised the communist government of Lao (the temple itself was a very beautiful Lao style temple, see picture above, coincidence? I wondered). Then he went into high-gear amazement and started praising the American CIA! He called them “friends” and said it would be great if they came to Thailand.

Later my guide told me that he was Vietnamese, and that his Thai wasn’t much better than his English, heavy accent. So I figure he was one of ours during the troubles and came to Thailand afterwards, maybe after some re-education, given his praise for communism.

He seemed like a nice guy, but it may have been in the manner of the nice Chinese guy in “The Manchurian Candidate” who taught the American soldiers to kill each other when they saw the Queen of Hearts.
Posted by fred c at 1:17 AM