Traveling Around In Thailand 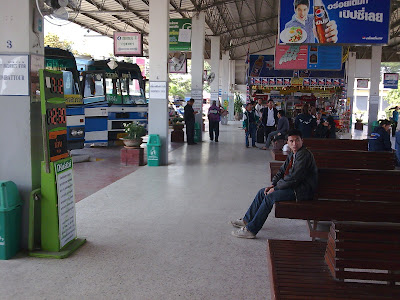 Buses go everywhere in Thailand, it’s all very easy really. And anywhere you want to go, anywhere at all, there are ways to get there from wherever the bus lets you off. It’s all cheap and relatively convenient, and you could do it too, honest.

From the bus stations there is always a local transportation network of some kind. There may be actual taxis, but probably not. More likely there will be tuk-tuks, three-wheelers with a bench behind the driver, some all enclosed and some home-made from motorcycles; or song-tao, pick-up trucks with two rows of benches in the bed; or motorcycle taxis; or three-wheeled bicycle taxis; or just some guy with a pick-up or a car. If worst comes to worst, someone at the station will call their cousin, who will leave work in the field to come and drive you somewhere.

When I show up at a station there’s always someone to ask me, “where you go?” At first I was very leery of these guys, it’s almost always guys. I drove cabs in New York, and it made me suspicious of anyone hustling rides at a bus station. In America, none of these guys are your friends, they all want to charge you a hundred dollars to go from La Guardia to Manhattan. My experience in Thailand is that they are all just trying to be helpful. (Except at the big airport in Bangkok, and there you can always get a meter cab.) They know you need to go somewhere, and maybe they can take you, and that helps both of you. And it’s almost always for the same fare that they would charge a Thai person.

For me, it’s a little easier, I admit. If I want a hotel, they’ll talk to me a little and find out how much I want to spend and what kind of place I need. This they can only do in Thai, so you they might just take to the best hotel in town, which you probably want anyway. Me, they ask, “do you want to swim?” “Do you want Farang TV?” Then they take me to the perfect place. I’m sure that the hotel kicks-them-back a few bucks, but they don’t ask for it from me. You, they might take to the hotel that gives them the best commission. You’ll be happy, don’t worry.

Not speaking Thai, you’ll still have some kind of guide book or something else written down that you can point to. Thais are not famously great English speakers, but almost everybody can sound out the A,B,C’s.

Hotel wise, I’ve stayed in lots of low-end places and I’ve almost always been comfortable. I say “almost,” there’s a cheap place in Bangkok that is popular with Peace Corps volunteers where the bad smell really put me off my food. By low-end I mean down to six dollars or so for a “Guest House” room with a fan, no phone or TV, and a bare-bones private bathroom, meaning small, and the shower and sink drain onto the floor, but I’ve never seen one with a squat toilet, all western style thrones. I think if you go down to three dollars maybe there’s a squat toilet, and maybe no windows or screens either, but no one would suggest that I stay there and there’s always something better.

Thailand is a wonderful place to travel around. It’s all very exciting and new, but it’s all very safe and hospitable too. The food, even from ramshackle restaurants or food carts, is safe to eat. Even the police are non-threatening: if you happen to get caught breaking the law they’ll be happy to “settle-out-of-court,” but they never set up foreigners to make money off of them.

My advice would always be to avoid the touristy places, who needs that shit anyway? What, you want to come to Asia to go to KFC?
Posted by fred c at 8:23 PM

But come on, we men all want to know---how are the hookers? Did you ever go to a Thai "barber shop"? Get a little trim? Tell us Fred, inquiring minds want to know!

Whatever do you mean? Prostitution is illegal in Thailand (true), and I am a married (ex) Catholic gentleman.

FRED: Does ex mean that your're not married or not a Catholic? One or the other or both?

Re: marriage: I still have a family.

It's ex-Catholic. I actually went to the St. Fidelis rectory one time and requested excommunication. That was a good time right there! I wish I had a picture of the priest's face. I assume I'm off the books right now.