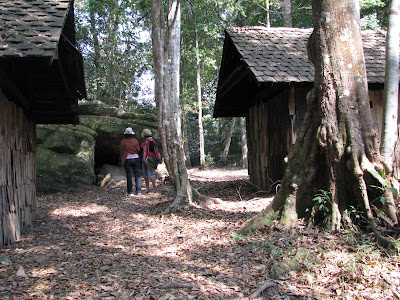 I always knew that there had been one, but I had thought that it was very small and confined to a small area, deep in the Northern mountains. A few years ago I visited a mountain village that was so remote . . . how remote was it Freddy? It was so remote that the inhabitants were not really sure if it was in the province of Nan or the province of Phrae. There were caves nearby that had been used by communist insurgents, I didn’t take the hike to see them but I’ve seen caves in that area, they are deep and solid. In the 1970’s the area was so red that the present government, to be on the safe side, still maintains a permanent presence of fifteen soldiers, one truck, and a helicopter-pad. But the whole thing was much more widespread than I had dreamed.


Last weekend I traveled to a hilly region very near the central valley “Rice Bowl” of Thailand to visit a preserved communist encampment; an impromptu field cemetery for cremations; some battle sites; and a bizarre Antonio-Gaudi-like cluster of buildings that serves as a memorial to communist soldiers who died in the fighting. My guide/interpreter/sign-reader was perfectly suited to the task: she’d been a university student during the demonstrations which sent many students to the hills to join the communist movement, and she’d been a young teacher in the countryside thereafter who had been subject to the whims and entreaties for assistance of both sides. She remembered everything, and she was a great source of information.


The political situation then was ripe for insurgency: a bad economy; trouble everywhere in the region; a “President-for-Life” style strongman, an army general and self-styled “Marshall” who ran the country like it was his personal fiefdom and who planned to keep the entire thing in his family through inter-marriage with the families of lesser bosses.


There was the usual talk of “workers” and “farmers,” but most of the grunt work seems to have been done by students from the better universities. There was overseas involvement, not much from Vietnam, but from a bigger country to the north, not Russia, do the math. There was bombing, including napalm, and lots of running gun fights back and forth across the area. Lots of innocent people got caught in the middle. It lasted a long time. I need to read more about it.


The importance of history is hard to underestimate. The danger that cleptocracy and megalomania will lead to violent resistance from below can be witnessed in Thai society today, on a more limited scale and in a much more progressive way, to be sure, but it can be witnessed in events like the recent takeover of Thailand’s biggest international airport. Takeovers and large demonstrations are violent acts in the pocket of a vest.


We in America also have lessons from history that speak to us today with great authority. I hope that someone is paying attention.
Posted by fred c at 6:53 PM