Italian multinational, actually. Not as cool as some, but cooler than others. 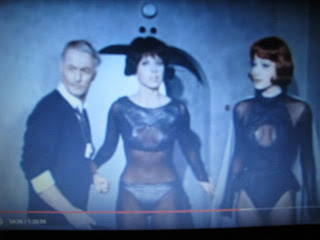 The story is that a group of aliens crash landed on earth years ago and were trapped underground due to an earthquake. A group of scientists working on some kind of geological problem discover the alien craft. They are captured by the aliens, and another earthquake makes it possible for the ship to lift off. The scientists are kidnapped. Oh, the beautiful daughter of one of the scientists is taken as well. 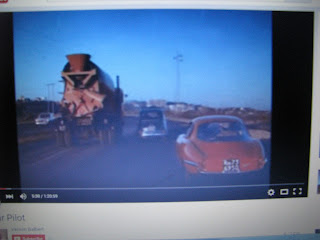 The highlight of the movie for me was the red Alfa Romeo 2+2 sports car that the main characters drive around in early on. It was a moment of nostalgia for me. My friend Doug had the same Alfa, and we spent many a happy evening bombing around L.A. in the late 1970s, Doug, Norman and I. This is a rare coincidence, because it was a rare car. Someone broke Doug’s windshield outside the Whiskey Au Go Go one night, and getting a replacement was tough. The Alfa dealer needed not only the model number and year, but also the serial number of the car itself. It turned out that they were all a little different. The new one came over from Italy and that story ended happily, if expensively. Nice car! Doug’s was red, too.

The scientists are followed initially by a really old Chrysler sedan. This is before any alien involvement. The followers are two “Oriental” spies. They are self-described as such. “You may think that we are sent by the People’s Republic of China. You are wrong! We are Oriental, but we are not Chinese!” At first I wondered if they were North Korean or something, but one guy’s name is Chang. I believe that they put in this disclaimer to avoid pissing off the Red Chinese, who were still pretty hot stuff in 1966. Did I mention? The Chinese spies are kidnapped by the aliens, too. 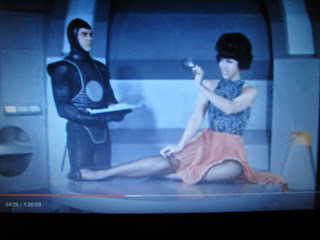 Everyone seems to get along surprisingly well, all things considered. There is the odd fight, and a couple of people get shot, but only one of the scientists is actually killed. Usually there is social peace and quiet, cooperation, and two inter-galactic love stories are developed. It’s all mostly an excuse to show off the scientist’s beautiful daughter and the hot alien babe (who is also the alien boss). 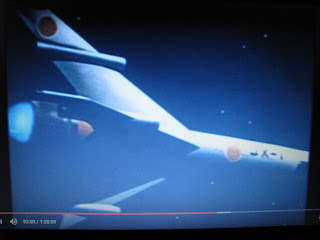 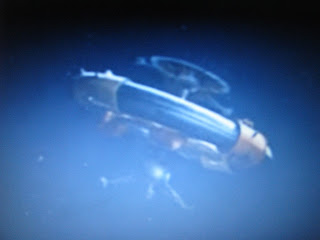 Once the craft is in outer space, the story takes a strange twist. An earth space authority is introduced, using stock footage from the Japanese space movie, “Battle in Outer Space,” 1959. This takes up about six minutes of screen time, but then that whole plot disappears and is never seen or heard from again. They just wanted to show some space hardware, I suppose, on the cheap. 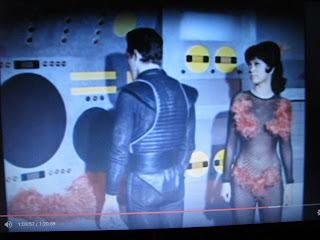 There’s some kind of emergency landing on a planet where our travelers are attacked by big, strong looking hairy man-beasts who carry curiously insubstantial sticks as weapons. Everyone duels with these flimsy sticks, and then Hot Daughter and her alien boyfriend blast the poor beasts. Another dead end plot distraction. 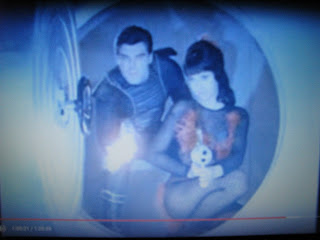 Around now there is a very brief description of the possible time distortions that may occur due to high speed space travel. And then they discover that some kind of spacecraft is heading back at them from somewhere further out. It’s small to have traveled that far, so it's a mystery. They go out and take a look.

Interestingly, both the aliens and the earth scientists (and spies) can go for space-walks in this movie using only a small breathing apparatus. They have heard a partial message from the craft, and they go over to have a look. It turns out that the message is a warning about nuclear destruction back on earth (the discussion of time distortion was a call-back). On the craft are two long-dead Russian cosmonauts who have decayed to dusty bones. 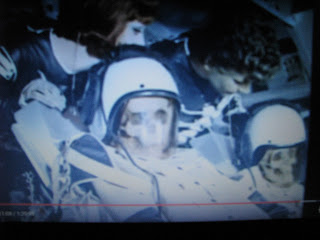 Oye, vey ist mir! By now we’re way up on the love plots and a strong anti-nuclear message is coming through, seemingly out of nowhere.

They land on the alien home world and . . . no one is there. It’s all overgrown and deserted. It seems they were so afraid of impending nuclear pollution damage that they just packed up the civilization and split for outer space. 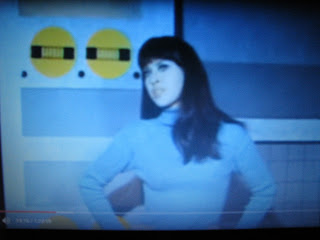 I’ve seen better examples of such movies, but this one was mildly entertaining throughout. I enjoy trying to keep up with inexpertly joined together plots. The two female leads were very decorative; one had some substance and the other one was delightfully ditsy. They were always dressed in wardrobe intended to show off their secondary sexual characteristics. Plus, it’s all on YouTube, so the price is right. 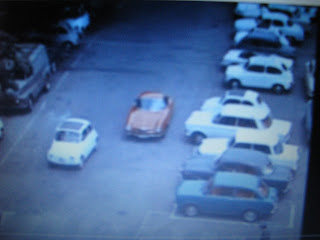 I wouldn’t encourage you to watch it, but you wouldn’t regret it, either. Honestly, if it didn’t have Doug’s car in it, I wouldn’t have mentioned it at all.
Posted by fred c at 4:19 AM