There was a time when English bikes ruled, and before the big twins came along the hot set-up was a big, honking single cylinder bike of 500cc displacement. The BSA Gold Star was about the hottest motor; Norton had the “Feather-Bed” frame, which offered precise, stable handling, and also had a great, reliable motor. Velocette made a nice example, it remained largely unchanged from the mid-1930’s but it was a real runner and actually held the twenty-four hour record, covering over 2,400 miles in a twenty-four hour period. There were a lot more: Vincent; AJS; Triumph; Matchless; JAP; and Royal Enfield.

Royal Enfield’s final entry in the motorcycle market was a huge, clunky, unpopular and unreliable 650cc twin. The company closed production in the late 1960’s after many years of poor sales. I never saw a Royal Enfield motorcycle in real life, and outside of history books any reference to them has been hard to find for over forty years.

A couple of years ago I was at a view-spot in the mountains of the province of Nan, Thailand. Nan is a beautiful place, with steep sided, forested mountains, gorgeous valleys, and lots of small rivers and lakes. It is sparsely populated, the provincial capitol is tiny and everything else is a village. The road infrastructure, though, is very good. The mountains are ribboned with roads that are nicely surfaced and graded. It’s heaven for motorcyclists. 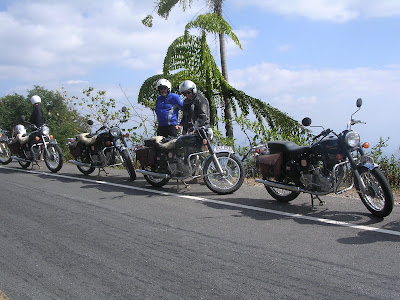 I was walking back to the car when someone pulled right in front of me on a Royal Enfield that was in perfect condition. Paint, chrome, seat, everything, perfect. I thought it must be a lovingly maintained bike from the early 1960’s, I went into one of the lesser forms of shock. When the helmet came off I saw that it was a European man, so I walked up to say hello. I noticed that it was a 500cc single, and still everything that I saw was in perfect condition. As he dismounted I heard a big noise behind me. Turning, I saw more than ten of these things stopping along the shoulder of the road near the view spot.

I turns out that Royal Enfield of India, Inc., had never closed up shop. These bikes had been in constant production since the 1940’s, and were still going, consistently if not strongly. These bikes were new. It was a motorcycle tour run by the company itself: the guide was a turbaned, bearded Sikh factory mechanic; the tourists were all Englishmen. 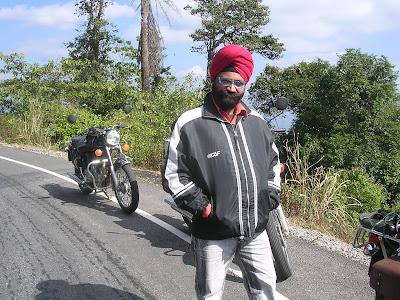 They were all a friendly bunch, happy to be chatted up by an English-speaker. Further proof that if you live long enough, you’ll see everything.