Progress On Some Fronts 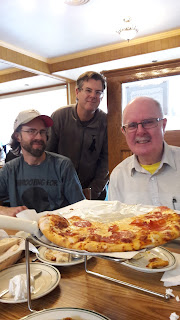 My sons have decided that it's time for them to start talking to me again. And quite civilly, I must say, I felt like I was really back in the club. Nothing was said about the years of silence, but that's how it goes, this life-on-earth routine. I was grateful, and I remained gracious throughout.

Here's a nice picture of the three of us, with a very nice pizza in the foreground. This was at Alejo's, a Mexican owned and run Italian restaurant on Lincoln Boulevard in Manchester, just north of LAX. I highly recommend Alejo's to anyone who may find themselves in the area. Los Angeles is famous for great restaurants featuring cuisine from all of the countries of the world, but if you look in the back you find out that it's mostly Mexicans doing the cooking (and, more commonly known, the cleaning up). A Thai restaurant that I like, Ananjak Thai, on Ventura Boulevard in Encino, has an entirely Mexican kitchen staff. All of the dishes on the extensive Thai menu are excellent and totally authentic. It's owned by a Thai couple, but the rest of the staff are Mexicans.

Somehow this post became about Mexicans, or I should say, Mexican-Americans. That's not a bad thing. I love to give Mexicans a shout on this here blog, as long-time readers know. Mexicans are very hard working, decent, versatile, and friendly people. They can cook my Italian food anytime.

And it was nice to see the boys, too. I saw my granddaughter as well, and that was wonderful. Forgive me if I don't show off with a picture of her. I believe that pictures of children are best left in family albums.
Posted by fred c at 1:17 AM