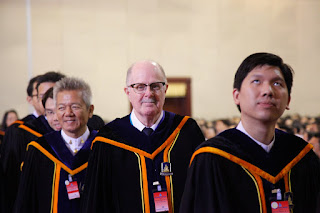 There was a time when I didn't mind at all getting my picture taken. That time lasted quite a while, too, and I was lucky in that way. The party started to slow down at about the time that Apple and IBM cloned home computers first became popular. It's been all downhill since then, and by now I absolutely dread the sight of the front side of a camera. The photos themselves I find mostly disagreeable and sometimes actually shocking. This one, though, is not too horrible.

This is a professionally taken photo that I found on the public relations site for my university. It was the first day of our commencement ceremonies, which go on for an entire week. The place was abuzz with security and photographers. School photographers, Royal photographers, media photographers. I was the only foreign professor there that day, so I saw a lot of cameras aimed my way. I'm very camera-aware, so I had a moment to compose myself before the click. This is the only picture that I found, not that I was even looking.

It's a good one, isn't it? I'll take it! How do you like my new glasses? I got them while I was in L.A. I'm such a creature of habit that I flew across nine time zones to buy glasses at the same place in my old neighborhood where I have bought all of my glasses for the last thirty-five years. They're Ray Bans. Do they make me look younger?
Posted by fred c at 1:19 AM