A Gem Of Bangkok Architecture 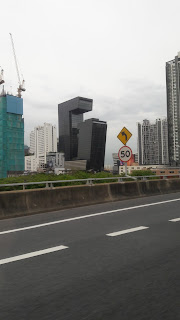 The architecture in Bangkok can seem like a strange mix of styles. It’s a huge city with very large buildings featured throughout, so there are a lot of them. I guess it’s a fairly typical “bell curve,” there are some really beautiful buildings that anyone would agree are architecturally successful, and there are some that are really unspeakable, with most falling in the middle distance somewhere, inoffensive perhaps, kind of nice to fairly ugly. Then there are the large, expensive buildings that make eccentric statements.

Like this one. This is a building in the shape of a letter of the Thai alphabet, the “ngaw-ngu.” Which is Thai for “the snake.” To see the letter properly, the building should be viewed from the other side. This is the view that I could manage from a moving taxi, so that’s all you’re going to get. You get the gist of it, though. (From this side it looks kind of like a "G," doesn't it? That was not part of the intended effect, I assure you.)