This Week In WTF: A Death In Fukushima

Every news cycle for many months now has been rich in WTF moments. Many of these have been provided by politics, which seems to have gone completely off the rails. The shocking political news has crowded What the Fuck moments in other subject areas way over to the corners of our attention. There are moments, however, when one of those other topics really squeezes a “WTF!” out of us.

Like the latest news from Fukushima, Japan. It’s been a long time since Fukushima invaded our consciousness. It was a big story though, quite memorable. The earthquake was 9.0 or 9.1, depending on where you are reading. The tsunamis were legendary, and they struck densely populated coastal areas of northeastern Japan. 15,000 people were killed! That’s big event right there, a terrible, awful, tragic, miserable day. To complicate matters, there was a rather large nuclear power plant right on the oceanfront area of Tsunami Central.

That happened in March, 2011. The quake was over in minutes; the tsunamis raised hell for a matter of hours and caused the majority of the deaths; the effects of the earthquake and the tsunamis on the nuclear plant are still being felt six years later.

This week’s WTF moment came in the form of a small news article about one aspect of the cleanup effort at the site of the nuclear plant. It’s all very dangerous and complicated, since large areas of the hot spots are underwater. Radiation has been too high even for humans in protective clothing. The highest reading at the site, previous to this week, was seventy-three Sieverts*. (Ten Sieverts is enough to insure rapid death in an unprotected human.) So the company in charge of the cleanup has constructed some heavily shielded robots to do the work. You may have heard: last month one of the robots encountered drama.

After two hours of exposure, the robot broke down due to extreme radiation exposure. (Most of the articles use the more dramatic construction, “the robot died,” or “the robot was killed.” Let’s go with “broke down.” We’ll be talking about robots as though they were people soon enough.) The radiation reading has been described as “unimaginable.” How extreme was it, Johnny! Well, the reading was 650 Sieverts, that’s how extreme it was. That’s nine times greater than any previous reading in the six years since the accident.

To paraphrase Jaws, “we’re going to need a stronger robot.”

Credit where credit is due: I started reading about this phenomenon at the Raw Story this morning, clicking through to the International Business Times, which is evidently where the Raw Story found the news flash. 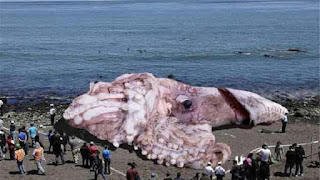 I’ve also been seeing bits about Fukushima and its effects on fish in our Pacific food chain. Strange tales of fish in Canadian waters with bleeding gills, and all kinds of Pacific fish with big tumors. I went over to the Woods Hole Oceanographic Institute’s website for an update. No particular methodology to the choice; they were the most likely trustworthy source near the top of the Google search.

Big article; real scientist; he’s been researching the effects of Fukushima since it happened. The good news is that all of the fish in the whole, giant Pacific Ocean are safe to eat. He didn’t find anything remotely threatening about any of it. People evidently worry about the tuna in particular, but they needn’t. It’s safe. Any Japanese debris washing up on West Coast beaches is similarly safe. The bad news? There is no bad news.

I saw other articles debunking the Fukushima/tumor thing, so it's bogus.

But if we want to worry a bit, that’s probably okay as well. After all, a jump from seventy-three to 650 Sieverts is no small matter! And that poor dead robot, that doesn’t happen every day. Maybe the guy from WHOI will update the update.

*Sieverts. A Sievert is a unit of radiation exposure that is designed to measure health threats to humans.

One Sievert will cause radiation sickness symptoms, like dizziness, nausea and vomiting.

Ten Sieverts will cause rapid death, anywhere from one day to a week after exposure. (Although many people with more exposure have held out for longer periods.)

For reference: one set of dental radiographs is between five and ten microsieverts.

1.7 millisieverts is the average annual dose of radiation for stewardesses.

1 Sievert is the maximum dose allowed for astronauts over the course of their careers.