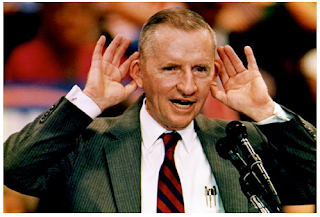 Harry Truman was a dry-goods store owner and Jimmy Carter had the family peanut farm, but neither of them ran for office based on their business skills. Of the others, there was one actor and quite a few professional politicians. (I’m limiting my search group to presidents in my lifetime.) Three candidates stressed their business experience and promised to bring those skills to running the government. That would be George W. Bush, Donald J. Trump and H. Ross Perot.

(I’m leaving out Willard Romney. Most of his resume was business related, but it was not the kind of experience that anyone would want voters to even know about, much less consider, being all robber-baron stuff.)

The funny part is that the two men in that small group who actually won the presidency were awful businessmen. W. Bush’s resume included several business failures that lost a lot of money for other people but from which he was curiously bailed out, plus a few downright shady deals (The Texas Rangers episode), and even included allegations of insider trading. Not a lot of textbook success there. D. J. Trump talks a good game, but his own record is full of bankruptcies, defaults and the stiffing of partners and vendors. The Donald received a few curious bailouts himself (like his dad buying millions of dollars’ worth of chips to help him meet payroll in Atlantic City). Neither of those fellows seems to have been very successful at running businesses at all.

The one who was demonstrably a wild business success was H. Ross Perot, and he is the only one of the three to fail in his bid for the presidency.

Being a third-party candidate hurt his chances, but he made a historically great show from that status. He got 19% of the popular vote in 1992 (19,741,065 votes). (Zero electoral votes, although he did win majorities in many individual counties.)*

Perot, unlike those other two clowns, was a business wiz. Everything he touched turned to gold. He was a graduate of Annapolis, the U. S. Naval Academy. As a salesman for IBM he made his quota for the year within a month or so and decided that he could do all that and more if he were on his own. This was the early 1960s. Perot started Electric Data Systems and it was a winner. In 1984 he sold that company to General Motors for two point four billion dollars ($2,400,000,000.) In 1988 he started Perot Systems Corporation. That company was sold to Dell Computers in 2009 for three point nine billion dollars ($3,900,000,000).

It’s safe to say that Henry Ross Perot was the best businessman ever to run for the presidency.

They say, though, that running the country is not like running a business, and it’s true. It’s totally different, is what it is. If you are running a country, you cannot default on loans just to achieve some strategic advantage. You cannot declare bankruptcy just to put pressure on creditors. And then there are the things that you can do, such as printing money and borrowing at low interest. It’s totally different.

W. Bush, and now Trump, only proved that business experience not only does not help, but also is very likely to make matters worse.
What would Mr. Perot have done in office?

1.   Balance the Federal budget;
2.   He opposed NAFTA (he came up with the quote, “that giant sucking sound that you hear is jobs moving to Mexico;”
3.   He opposed gun control;
4.   End job outsourcing (i.e., shipping jobs overseas); and
5.   Reduce the deficit by imposing a gasoline tax and cutting Social Security.

That looks an awful lot like Donald Trump’s professed goals. It’s a program without a chance of working. In fact, it’s a program that will do more harm than good. So I guess that even H. Ross Perot, the genuine business success, would also have failed to run the government better than mere politicians.

Incidentally, H. Ross Perot is alive as of this writing. In 2015, he was listed as the 129th richest man in America, with $4 billion dollars. He was an odd bird, but likeable, in his way. I wish him well.

*Which major party candidate was assisted by the votes that went to Perot? That’s about as clear as mud. Perot’s votes seem to have come from all points of the political compass, so you can’t say that he took conservative votes away from George H. W. Bush. Perot’s votes came mostly from the middle-class, so the votes of the rich and the poor went to their respective natural beneficiaries. I’m no expert, and I haven’t made an exhaustive study of it, but it appears likely that Clinton won in spite of Perot, and not because of him.
Posted by fred c at 10:41 PM