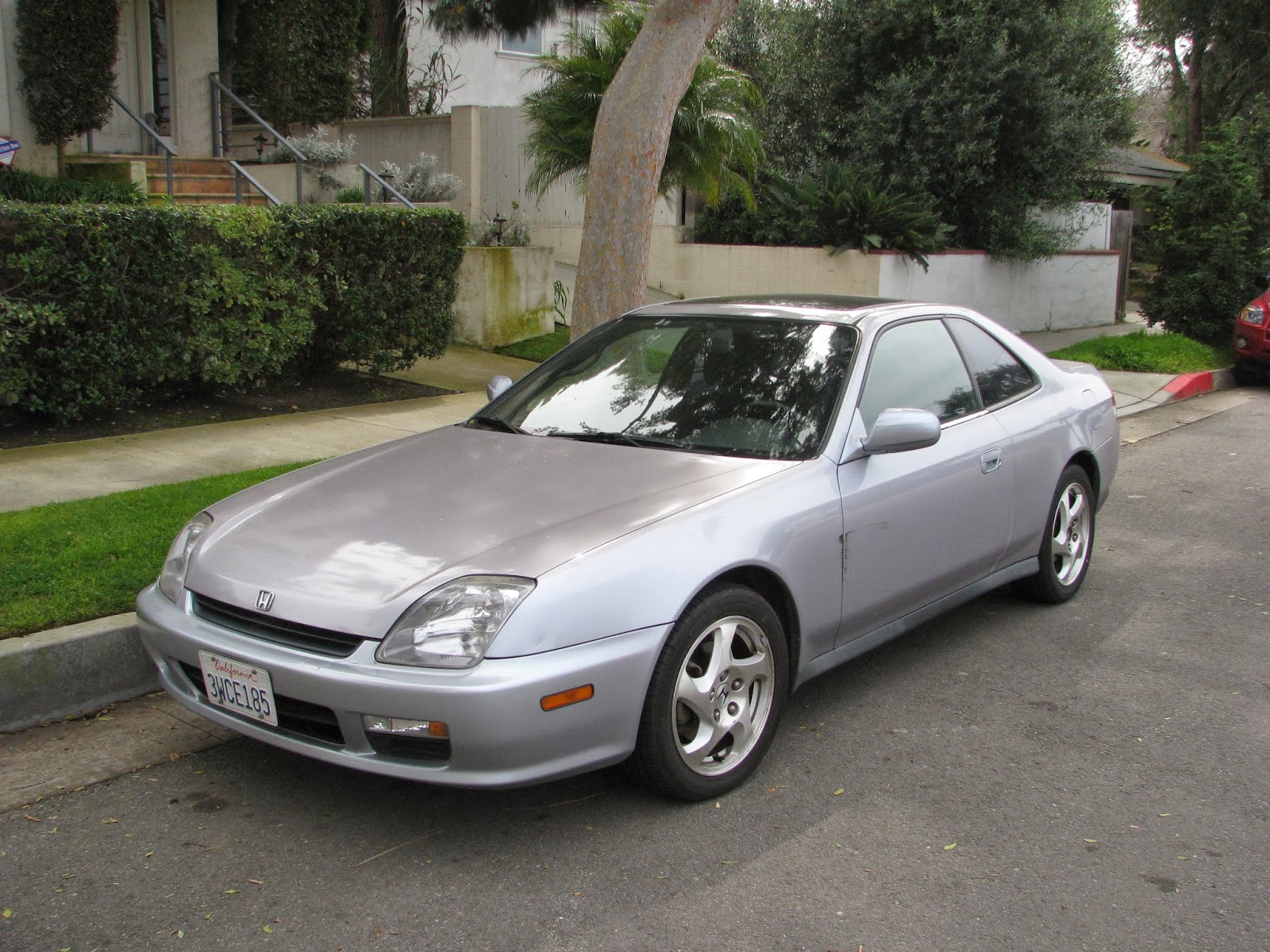 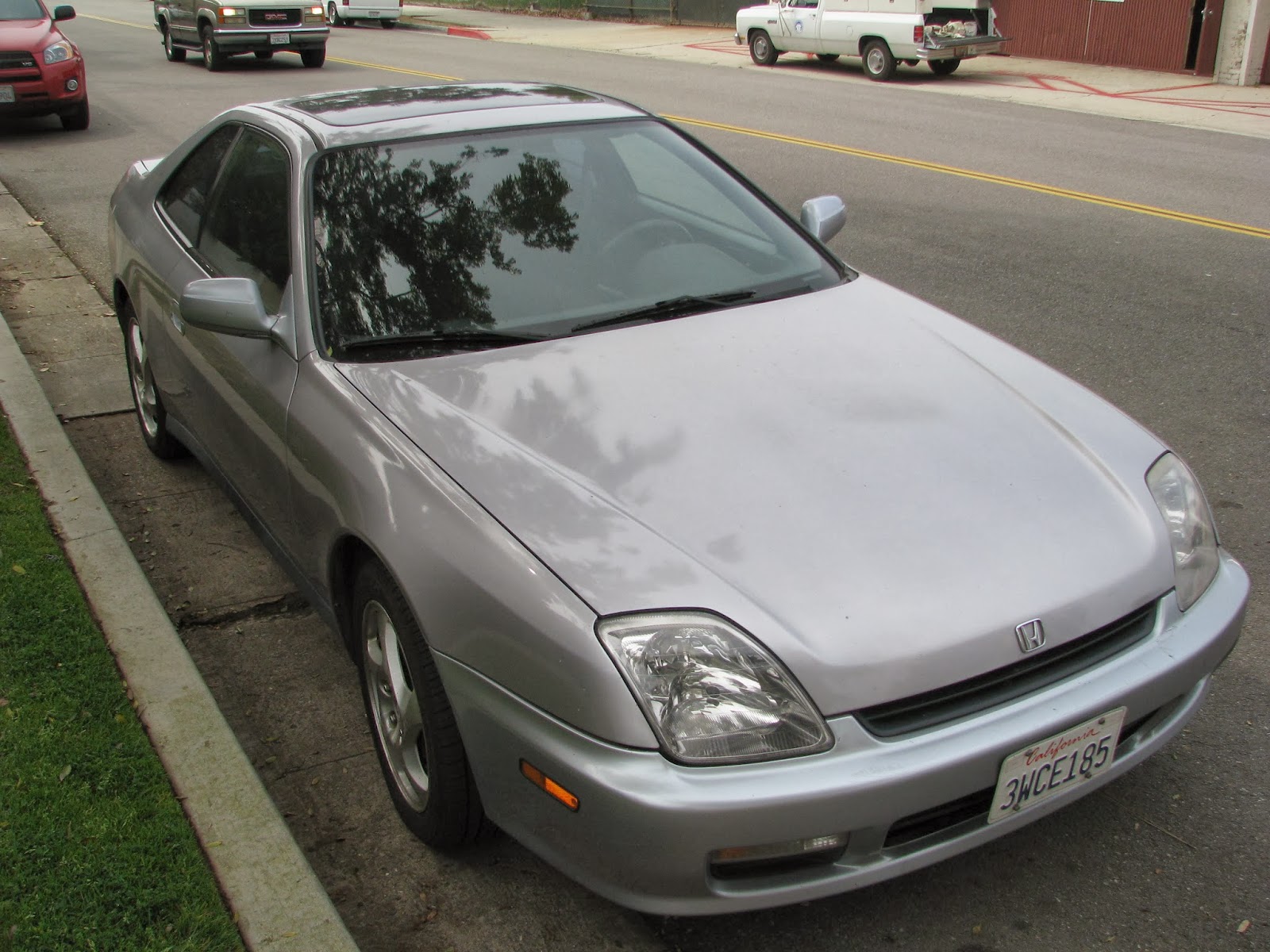 This was my car (explanation later).

It's a 1997 Honda Prelude; I bought it new in that year.  This was a new body style for the mark, and the first year of the square headlights.  Honda had high hopes for this car, and to give it a good send-off they wildly overbuilt the '97's.  Power assisted rack and pinion steering; limited slip differential; 2400 cc, 195 hp Vtec engine; everything heavy duty; four wheel ABS disk brakes.  The last time I drove it, in early 2013, it still felt like a new car.

It was always well maintained.  Frequent oil changes; the timing belt was replaced long before it could be expected to break.  And man! what a rocket!  The clutch and gear box were very precise and smooth.  The red line was around 9500 rpm, and you could down shift with no trouble at 7000.  I kept good tires on the car too, Pirelli P2000's as often as I could afford them (they're on the soft side and don't last as long as most radials).  The phrase "it cornered like it was on rails" was written for this car.  I spent many a thrilling afternoon risking my life up in the canyons of Malibu.

They sold it last year, without even telling me.  I found out almost by accident.  Sold it for $2,500, which might have been around the Blue Book but which represents one of the greatest values in the history of cars, or the history of money for that matter.  Telling me was an afterthought.  Who are they?  That's a story that I am leaving for another day.

I miss a lot of things these days, most of all my granddaughter.  People come first, way beyond mere things.  But I miss this car like crazy.  I'll never see its like again.  I suppose that the proper attitude now is just to say that I was lucky to drive it while I could, and I'm happy now to have had the chance.

Nice car. Too bad "They" didn't want to drive it forever, or store it for you forever. And too,too,too bad you couldn't ship it to Bangkok. Sad old man.

I was thinking about shipping it to Thailand. The usual impediment is the bond that must be posted when you import a car, a bond equal to the value of the car. Since the Bluebook was so low, the bond was do-able. Nobody thought to ask me.

And yes, I did perceive the sarcasm in your comment.

The height of vanity. I've read your posts. You're sad because this and that, why is life so cruel, etc, money is a varied animal across the globe, pizza costs a hundred dollars in Baht, to drive a gas powered automobile is for the rich. But if you had money you'd be paying for cancer treatments, cause you're such a good guy. Irony is lost on you old man.

I like the throw-backs. That Prelude was a nice one. It was made when cars were still made out of metal. I currently drive a 1995 Toyota 4runner and happily I'll add. You can hammer nails all day with these old cars then jump in & drive home.

Someday I'll get my 1964 Falcon together & start driving that as my daily commuter. Fucking thing gets like 30 miles to the gallon. Woe to the person that nicks me in that thing. I 'll hardly feel the sting while they're guts are strayed across the street. The Prius is made of cheddar.

p.s.
Shut the fuck up Oliver