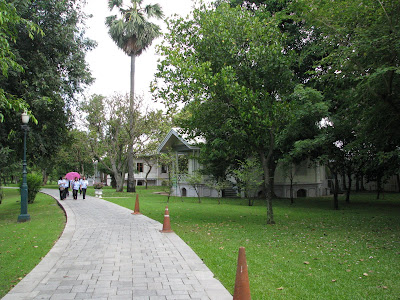 Yesterday I took a trip with my buddy Choophong and his family to visit the recreational palace, the out of town get away mini-Versaille, of the great king, Rama Five. It was all very impressive, but my favorite part was this large collection of nondescript but nice houses tucked over in a wooded corner of the large, park like property. It was the wives' neighborhood.
It was house after modest house, each bearing signage naming the occupant. They had titles which had meanings like, "Main Wife," "Wife with Children," even "(Mere) Concubine but with fully accepted Royal Children." One slightly bigger house listed five wives names, the "bull-pen" I suppose.
Rama Five was a busy guy on the wife scene. He had lots of them, and lots of children, no less than seventy four sons alone. That was in the second half of the Nineteenth Century.
This kind of thing is the rationale that Thai men offer even in these late days for having more than one wife. In Thailand, if you can support a second wife, you know, put her in her own house and pay the bills, most people think it's ok. The women don't like it, no surprise, but for men with money it's a way of showing off.
How do you feel about that, said the doctor?
Posted by fred c at 11:47 PM

OK, if your goal is to spread your genes. Otherwise, it would be strange and hard to manage in a western setting.
Of course, polygamy is always the boogy-man the Right raises when gay marriage is being discussed. If you let two men marry, why not one man and 3 women? Why not a man, his dog and a 2 chickens?Why not brothers and sisters etc ad absurdem...

To be fair to Rama Five, the great Chulalongkorn, he had a plan and the wives were just accessories. He wanted to change every aspect of Thai society and destroy the old "Mandarin" class. He figured if he had seventy or so sons, twenty of thirty of them would be smart enough to help, and he put them in charge of every ministry there was, including all of the new ones that he invented, like the police, the post office, the railroad, the navy, everything. The sons could institute all of the changes that they wanted (and had discussed with dad) and no one could give them any shit, because they were Princes. Cool idea, and it worked.