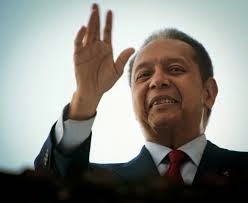 A recent photo of Jean-Claude Duvalier, attempting to look non-threatening.


Son of Francois “Papa Doc” Duvalier, and quite the little dictator in his own right, Jean-Claude “Baby Doc” Duvalier cut a successful path of terror and self-enrichment through Haiti back in the day.  After he was deposed in 1986 he went off to France  and retired, quietly, in circumstances that ranged from luxury to mere prosperity.  He died this year.

It took tremendous talent to get away with all of that and then go on to enjoy a long, sometimes luxurious retirement.  He even returned to Haiti late in life.  Some people complained, but he got away with that too.  In twenty plus years of retirement he had had people in several countries trying to prosecute him, but he managed to keep them all at arm’s length and die a free man (albeit under indictment).


So kudos, Baby Doc.  Somehow you bent the world to your will; you made the world in your image.  Those are rare things.   Man of the Year!
Posted by fred c at 11:21 PM