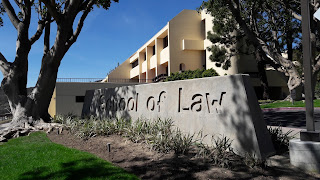 I started law school at Pepperdine in Malibu the day after my fortieth birthday. I had good undergraduate grades, and a high LSAT score, so I was accepted by all four of the schools that I applied to. I could have gone to Loyola, which is a higher rated school, but I chose Pepperdine. There were two reasons: 1) they offered me a 25% scholarship; and 2) the location. 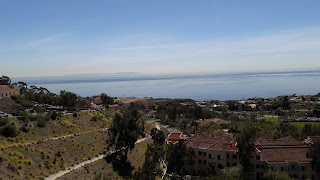 This is the view from the law building. In the years before I started school, I regularly rode a motorcycle around these hills and along this coast line. I'd seen Pepperdine, in fact I had ridden around the campus. I thought that law school would be stressful, which is was, and I thought that this location would be relaxing, which it was. 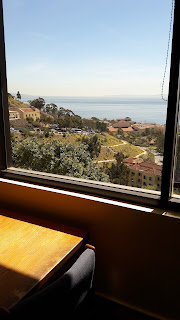 This is the view from one of the study tables in the library. On a good day, you can see Anacapa Island in the distance, and frequently you will see a hawk glide by, close to the hillside.

It's still a beautiful place, but like all American universities it's frighteningly expensive now. I graduated in 1991, and the tuition was under $15,000 per year. Now it's almost $50,000. It's a nationwide scam organized by the government, the university system, the lenders, and the collection industry. The students are the victims. I've got an old post up here about the whole process in which this new system was set up. I got out just in time, but then I have always been a very lucky man.