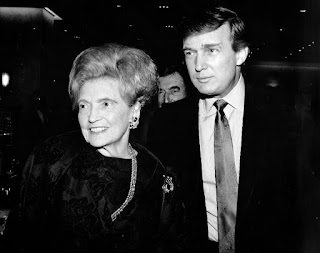 The Donald and his mom, Mary Trump.

He looks remarkably like her, the shape of the face is the same, the nose, the wide-spaced eyes. And, of course, the hair.

Mary crossed the river before closer hair analogies were possible, but look up later pictures of her and compare them to current pix of the now geriatric Donald, with his spectacular comb-over. Mary's spectacular optical-illusion comb-over was very, very similar. Disturbingly similar.

It all reminds me of a particular movie directed by Alfred Hitchcock, in which a disturbed young man dressed up as his own mom and brought considerable mischief to his co-actors. What's the dynamic here? Trouble, boys and girls, trouble with a capitol "T." Go ahead and elect him, at your peril. It's your right! Vote your conscience! No one can stop you at this point! But I'll tell you right now, if Donald gets elected, and the dollar is destroyed in the resulting, inevitable catastrophe, causing me to lose the value of my hard earned bank money, such as it is, I'll hold it against you forever, and forever curse your smoldering bones, from a distance.
Posted by fred c at 1:07 AM