From The Phi Phi Andaman Legacy Guest House In Krabi 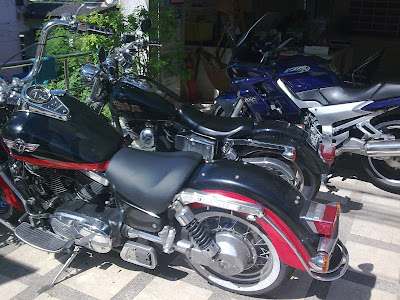 I taught a class in Trang province last weekend. Very beautiful countryside, very green, ridiculously green, nice hills with strange shapes, fabulous beaches with islands reminiscent of the hills. The people were wonderful, very friendly, very attractive women, even by Thailand’s high standards, great seafood everywhere, great weather, nice cool breeze. In the provincial capitol of Trang, a pretty big place, I didn’t see many Farang at all, and I got around a bit. The ones I did see looked like they lived there. The plane down was almost all Thais.

For my return flight there was nothing available from Trang, so I booked a flight from neighboring Krabi. My class was in the morning; I took the bus to Krabi in the afternoon, two and a half hours or so. I’d never been to either place before. Same kind of scenery, maybe even a little bit more scenic. Krabi, unlike Trang, was crawling with Farang on vacation.

So walking about I was surrounded by young, White trekker types with colossal back-packs, the town was swarming with them. They were a particularly foul breed, no one was smiling, they spoke languages that I mostly didn’t recognize. Young people from every rat-hole in New Europe can obviously afford to travel now.

They mostly seemed very unhappy and anxious, so much so that it felt vaguely dangerous to be around them. They wore outfits that no self-respecting person would even consider wearing under any circumstances, not even to a dirt-bomb fight. Shorts of all lengths, bandana-headed, petal-pushers, faux ethnic garments, T-shirts and tank tops (the better to display their bad tattoos).

These young people rented huge motorcycles and thundered around town desperately trying to look cool. I’ve only seen these kinds of rentals before in Phuket and Pattaya. Some real Harleys, but mostly Japanese copies, and some big bullet-bikes. (See accompanying photograph.) They parked the bikes in front of bars and sat around drinking bottles of beer in foam cozies, desperately trying to look bored. It was all so desperate, man. Back in Slovakia they probably study accounting.

Older White tourists were present too, dressed only slightly better. People will leave the house dressed in any damn thing these days. The older crowd looked unhappy too, slightly confused, disoriented, like people soon after a hard interrogation.

The TV in the guest house was downright strange. It had the big three Thai commercial channels; French TV5 Monde; a Dutch channel of mostly talk shows where the sound kept cutting in and out; a channel that alternated one of the lesser C-SPAN’s and Voice of America, in Farsi no less, go figure; a strange Thai channel called Top Star that featured very glossy propaganda boosting the Royal Family; a Pakistani shopping channel (!!!!) that spent all day flogging bootleg Blackberries in a mix of English and some local Pakistani language (the “spokesmodel” was a poor bony thing, wall eyed, screechy voice [“50% off! for ten minutes!”], horrible make up, wearing black designer jeans and a tight, black top, mascara all over the place); and of course a music channel featuring unlistenable World-Pop and some Asian lip-synchers.

The Dutch channel reminded one that they really wrote the book on dressing funny, the Dutch. How, I always wonder, can they be so square and so cool at the same time? Maybe they prove that it’s cool to be square.

TV5 Monde showed a French variety show that sub-titled itself “the Greatest Cabaret Show In the World,” in English, as though they were specifically trying to impress us, we English speakers. To their credit, the show did feature topless Crazy Horse beauties, no pasties or tiling. There was a woman with a trained cat act, ten or more cats doing tricks usually associated with dogs. One of the cats was casually grooming itself while it rolled a barrel across the stage. The act was otherwise uninteresting.

I say one of the lesser C-SPAN’s, you know the ones I mean. One show I watched was a panel discussion about President Reagan’s legacy, held at Notre Dame University. It was a love fest. The panel consisted of four old, White, fat Reagan White House capo-regimes, I did not pollute myself with the memory of their names. To hear them tell it, Reagan was a hard working, hands-on genius who solved all of the world’s problems and was personally responsible for every single good thing that has happened since, and not at all the ego maniac who should have been impeached for Iran-Contra. Reaganomics! Trickle down my ass.

On the flight from Krabi to BKK most of the announcements were made in Thai, then English, then tapes of Spanish, French and German. At that, I think they missed communicating with most of this crowd.

Did I say that I try to keep this blog nice and light and airy? My! but I do get the vapors sometimes.
Posted by fred c at 1:03 AM

Krabi, a must to avoid.