We Who Are About To Die Salute You 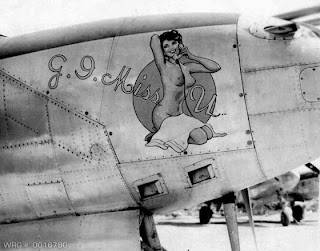 This is the nose-art on a Lockheed P-38 Lightning in the Pacific during WWII.  Not too late in the war, no doubt.  As soon as the result was cut in stone (in our favor) the brass started to crack down on the ruder forms of nose-art.  Earlier on, when the result was in doubt, anything the guys whose lives were on the line wanted was fine, fine, fine.  Nudity, schmoodity, just go out there and die for your country.

The lesson: what do men think about in a war?  Well, the same thing they think about all the time, only more so.
Posted by fred c at 7:35 AM