It's Good To Have Friends 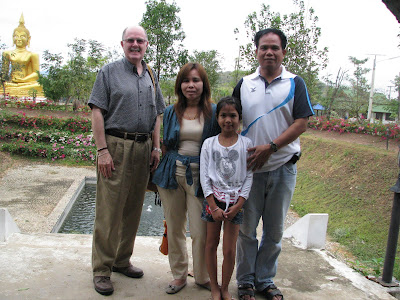 This is me with my buddy Suksa and his wife and daughter. Another daughter is studying in Bangkok. Suksa is a retired Thai Marine and a young lawyer (the Common Law euphemism for someone who has been a lawyer for fewer than five years). He's also an ex-student of mine. He's a very nice guy. He's one of those Thai's who realized early on that English was good for just about any career. In the Marines, his facility in English got him choice assignments with UN and ASEAN deployments around Asia, which meant extra pay and more medals (inter-service cooperation!).