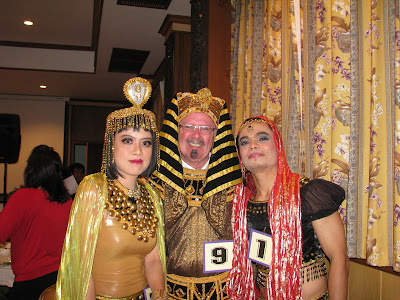 Maybe I should have gotten it right away. I was told that for our faculty party I would be the Fah-Low, and I said sure! sounds like fun, I’m a get-along guy. I didn’t know what a Fah-Low was, and I didn’t know what other costumes there would be, so I had no frame of reference.

Right before the party I got the costume, oh! I’ll be the Pharaoh! as in pyramids and mummies, as in Mr. Big-House himself. Here's a nice picture of me with Cleopatra and, I don't know, I didn't get her name, Sherazade, Solome, some Middle-Eastern broad. (This kid should have gotten the big prize, he's straight if I don't miss my guess, but he good-naturedly camped up his role to the hilt.)

The party was a blast. After a while we costumed folk took turns on stage, showing off the costumes and giving a little talk on our own behalf, it was a low-stress contest. One interesting thing about my university is that if they ask you to do something extra they arrange to get you paid a little extra. So there was like a six-way tie for fourth place (500 Baht each) and another six-way tie for third place (1,000 Baht). I was in the third place group. Then Cleopatra and Tinkerbelle were called to the stage and first place was given out American Idol style. Tinkerbelle took it, no surprise, she really played her candidacy all evening. In her turn on stage she even had music and a video! Talk about being prepared. 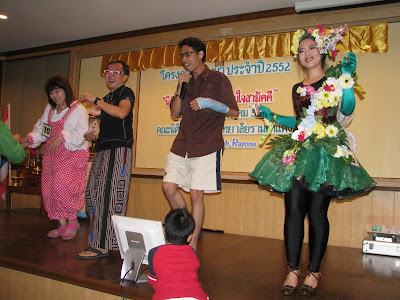 Here's Tinkerbelle; to the left is my buddy Ajan Apichai, whom people never tire of telling me is a Muslim; next left is a nice guy who I'm pretty sure loves me; in red is the Cat In The Hat, a lovely woman who speaks good English and who helps me out a lot.
Posted by fred c at 6:39 AM

What a great laugh you gave Oliver, Keith and I with the Fah-Low as in Pharroh! The costumes are great and everyone looks like they are having a lot of fun. Remember when our two Thai co-teachers told us they were taking us to the water-fall and it was the Songkron celebration? Boy is it ever hard to understand each other when none of us is fluent!!!
Love, Ann

Oh, it was fun alright. I was onstage when Tinkerbelle spun into her big multi-media pitch, she must have known that money was involved. I thought, fucking Tinkerbelle has music! That's cheating!

I was just in it for glory and fun, I greeted tables in a big, theatrical barritone, I am your Fah-Low! The thousand Baht for a share of third place was a pleasant surprise.