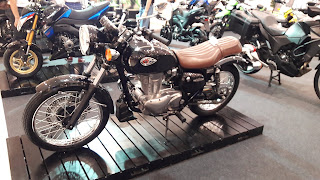 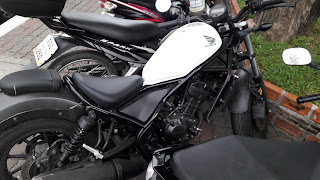 There are a million motorcycles in Bangkok, but almost all of them have engines that displace 125 cc or less. Most of them, in fact, displace 100 cc, with a sprinkling of 115 cc engines. Those are all step-through frame jobs with the gas tank in the seat. Suzuki, and, I think, Yamaha, make step-through framed bikes with 150 cc engines, just to try to create and fill a market niche, but you don't see many of those. Any bike displacing 175 cc or more is automatically a big bike. Almost all of those have tube-down frames and a gas tank up where it belongs.

There are a few manufacturers marketing single cylinder 250 cc motorcycles. That's the next step up, size wise. Yamaha makes a beauty; it's really a classic. I've posted pix of those on many occasions. I love those bikes. These two shown above, I encountered the both of them this week for the first time.

The top picture shows a Kawasaki that was designed to be as close a replica of an English 500 cc single from the 1950s as possible. Except for the giant, vented front disk-brake of course. It's a handsome bike, and I'll bet that it makes a beautiful sound. Fast? Don't be silly. Even those old English bikes weren't fast, at twice the displacement. You could row them through the gears for seven or eight minutes and get them going 100 mph, but everything “quick” was denied them. With either of these bikes in the photos, even 100 mph might be too much to ask.

The bike in the bottom picture, however, might have more of a chance of reaching the “ton,” as the English lads once called going 100 mph. It's a Honda, and it has nothing to do with anything old, design wise or anything else wise. It's water cooled, and almost certainly double cammed with four valves per cylinder. It certainly looks faster, and probably is rather faster, than the Kawasaki.

This is all very interesting to me, but I realize that I may be trying my readers' patience. Not everyone shares my sense of wonder at everything to do with motorcycles. Well, let's be real. Whose blog is this anyway?

Honda makes a really beautiful 400 cc single, but it's so rare that I have never had an opportunity to photograph one. I saw one again yesterday, and man oh man, it's a beauty. What a sound! That's a real thumper right there. It's all laid out cafe-racer style, Old School English all the way. You could make the ton on that one, definitely. If I were thirty years younger, I'd buy one. Might as well drain the oil and keep it in the living room on display though. Living in Bangkok, there's no place to let out the leash on a fast bike.

I'm too afraid of orthopedic injuries these days to really push the envelope anyway, so who am I kidding? But I still take the taxi-motorcycles on my Soi down to the main road. The guys love me, because I give them double the fare as a tip and talk to them in Thai. It's only an extra quarter. I have loved every second that I have ever spent on a motorcycle, since that first ride long ago, 1964 to be exact, when my friend Hilliary's brother drove me home from Bayside to College Point on the back of his Honda CB-305 Super Hawk. I was smitten, and I've never gotten over it. If I die tomorrow on the Soi, people will say, “what the fuck was a seventy year old doing riding on the back of motorcycle-taxis in Bangkok?” You can tell them for me, “he was just enjoying himself, that's what.”