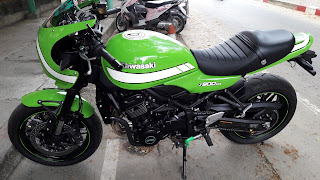 This beast calls itself a Kawasaki z900 RS. That is a vast hunk of motorcycle here in Thailand, where anything over about 175 cc is considered a “big bike.” 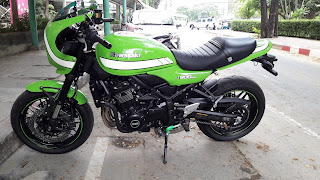 Isn't it a beauty? We used to call a bike like this a “general purpose” model. It's nimble enough in traffic to use as a daily-rider; it's comfortable enough that you can ride it all four hundred miles north to San Francisco in one day; the riding position is back and low enough that you could race it at Laguna Seca; you could probably even ride it across the occasional open field if the situation called for it. General purpose. Those bullet bikes can get pretty uncomfortable in traffic, or after a few hundred miles of mostly highway.

You don't need all of those Ninja body panels and the super-low riding position under about 120 mph anyway. This bike has nice flat bars and rear-set foot pegs, but not low enough to hurt your feelings. 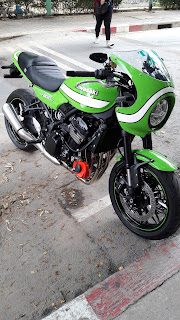 How fast would it be? People used to ask me that about my Yamaha 650 Seca, which was a similarly laid out general purpose bike. My answer was always, “I don't know.” I had had it up to 100 mph a few times, and that was fast enough for me. Regarding acceleration, this Kawi would have what I call, “the speed of thought.” If you're going forty, and your mind forms the thought, “go seventy-five,” bang! You're there. Zero to fifty or sixty would only be a negligible few seconds, and the acceleration would practically throw you off the back of the bike.

Man, if I were thirty years younger, I'd buy one of these. Oh, and I'd have to be back living in California. There's no place over here to ride a bike like this. But it's a beauty, that's for sure. If I owned one, I'd drain the fluids and park it in my living room.