Speed Is Not Good For You 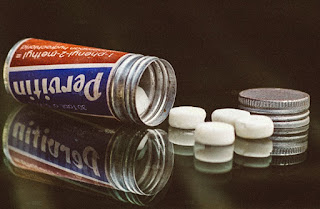 There’s a funny thing that happens with speed. It happens at different times and in different countries. Whenever speed appears on the scene as a novelty, people get carried away and think that the speed won’t hurt them a bit. Then comes abuse, and finally, for individual abusers and larger communities, there comes a terrible reckoning.

This pattern sure hit the Nazis hard. The word is that speed came onto Nazi radar during the 1936 Olympics in Berlin. Many sources mention American athletes using Benzedrine. The Nazis saw the results, and they were smitten. Within a matter of months a German pharmaceutical outfit came up with a much stronger variant, a kind of crystal methamphetamine. It sounds familiar to anyone who properly experienced the 1960s and 1970s; it is very reminiscent of the pills that were called “Black Beauties” at the time. Boy, were those things strong. The Nazi speed was branded as “Pervitin,” and very soon it was the toast of the town.

It was marketed to housewives in the form of speed-laced chocolates. It became very popular with factory workers. The Nazi military machine was particularly enthusiastic. When World War II started, millions upon millions of the Pervitin tablets were issued to the troops, from tank crews to pilots, and everyone in between.

WWII was the first war to be fought on speed. “Blitzkrieg” was partly a matter of tactics and partly a matter of the drug of choice: Pervitin. In 1939, the French were at a loss to explain how the Germans could keep moving and fighting for days at a time without stopping to rest. They thought that it was a mental condition, and they had a great French name for it: phenomene d’hallucination collective. That is also how the German Landsers went into Poland and the USSR, and they used the stuff throughout the war.

Hitler was abusing speed as well, and the effect on him can easily be seen in photographs taken over the years. He was getting “vitamin” shots from his personal doctor. Speed and cocaine were prominent ingredients. (The cocaine came later on, and Hitler quickly became a big fan.) Speed leaves you a wreck, a physical and nervous wreck. After a matter of time, the results become obvious and only the most desperate abusers will continue the behavior.

The effects are so inevitable, and so terrible, that it is a marvel to me that our current epidemic of crystal meth abuse has been going on for so long. It can only be that there are deep psychological needs that are being met by blasts of Crank. People are very afraid, and they have lost their confidence and their security. They grasp at meth even though they must be aware on some level that it is massively self-destructive and only a temporary patch at best.

I’m afraid that we’ll need to get used to it, because everything is only getting worse these days, and that trend is bound to continue with the current bunch in charge. It’s a shame, too. America has never been a perfect place, but it was a pretty good place there for a while. (Especially if you were a white American.)

I’ll take credit for the editorializing in the last two paragraphs, but the rest of this piece relies on an article by Antony Beevor called, “The Very Drugged Nazis,” which appeared in the New York Review of Books on March 9, 2017. The article was a review of a book on the subject by Norman Ohler.
Posted by fred c at 1:47 AM