Not A Movie Review: Baby Cart By The River Styx

This is the second movie in the Sword of Vengeance series. Ito Ogami, "Wolf with Child," and his cute little son Daigoro travel around Japan cutting people down like there was no tomorrow. I love these movies. 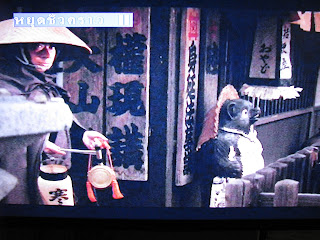 I was surprised to see Kumamon show up outside of a noodle shop. We now know Kumamon as the mascot of Kumamoto, a city in the middle of the island of Kyushu in southern Japan. Evidently the image has been around for a while.

There are three groups of more-or-less bad guys in this movie. A group of about ten ninjas, led by a Yagyu stooge; a group of eight female ninjas led by a demented boss lady ninja; and three brothers who are described as "Shogunate escorts."

The escorts are interesting. They travel around Japan to pick up and deliver people to the Shogun. They seem unstoppable, until the end. They're not bad guys, not really. They only kill people that attack them. That's their stated policy and they stick to it throughout the movie. Lots of people attack them, though, so they get many chances to show off. They are the Hidari brothers: Benma (who straps on a claw hand when it's time to go to work); Tenma (who uses a mean looking studded club); and Kuruma (spiked fists). 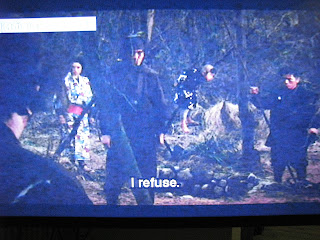 After Ogami cuts down eight of the Yagyu ninjas and all of the female ninjas except the boss, the remaining bad guys decide to kidnap Daigoro. They figure that will cause Ogami, who is already wounded, to lose heart. They figured wrong.

In one of the great swordsploitation scenes of all time, the Yagyu boss has Daigoro tied up and suspended over a "bottomless" well. His two henchmen stand between Daigoro and his dad. The boss tells him to drop his sword or else "I'll let go and he'll die for sure." Ogami makes a little speech, which includes, "my son and I have chosen a life of evil. If this is the day that we lose everything, we're prepared . . ."

Then he turns and addresses Daigoro: "Daigoro! Your mother is waiting for you at the River of Sanzu (Styx). Do you understand?" That's the way it was on this DVD anyway. The way that I remember it, in the theater long ago, Ogami said, "Daigoro! Your mother awaits you! And I'll be joining you both soon." I like my remembered version better.

Then dad kills the three Yagyu in a heartbeat and grabs the rope before Daigoro gets too wet. All this time, Boss Ninja Chick has been standing over to one side with an expression of mixed fear, horror and admiration. She's never the same after this scene, the starch has just been knocked out of her. 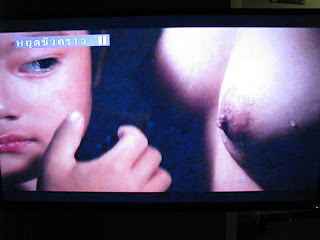 After some more action on a boat, Ogami and Daigoro end up swimming underwater to clear a bad situation. Who come along with a blade? Boss Ninja Chick. Ogami grabs her and she drops the blade, and then he drags her along to a shack next to the water. He first takes off Daigoro's wet clothes, and then his own, and then he rips her clothes off as well. She's terrified, thinking it's a rape scene, but no, he just wants them all to snuggle together to keep Daigoro warm. He's such a good dad! Daigoro mischievously plays with her nipples and she loses even more starch. 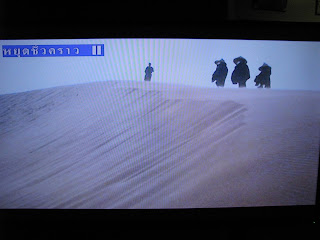 There has to be a big murder-fest at the end of these movies and this one's no exception. First to die are a bunch of samurai buried in the sand who came along to help Ogami kill the object of his contract, as though he needed help. They just succeed in getting themselves killed by the three brothers. Ogami is another story. The three brothers spend an unpleasant last day on earth. 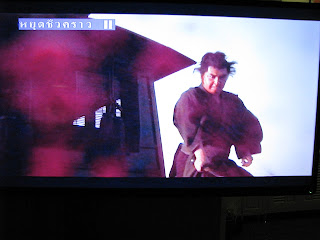 The actor who plays Ogami is Tomisaburo Wakayama, the brother of Shintaro Katsu, the actor who played Zatoichi in that earlier series. This Sword of Vengeance movie was directed by the same fellow who directed a few of the Zatoichi movies, Kenji Misumi. I never get tired of these movies.