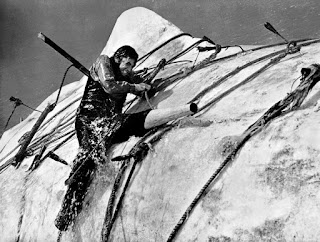 Little known fact: in the first movie version of “Moby-Dick,” Captain Ahab’s full name was Ahab Ceely. Same spelling, usually. Kind of amazing, when I think about it. (Ahab was played by John Barrymore. I should be so lucky.)*

Yesterday I wrote 1,500 words about the story arc of my life, but if I ever post it, it won’t be soon. It all looked like a lot of complaining to no purpose. I had a less than perfect childhood . . . so what? I underperformed throughout my adult life . . . so what? I was overtaken by events upon the eve of my retirement . . . so what? Those tragicomedies are probably best kept personal. But are there lessons in there somewhere that might be useful to a general readership? There could be.

I’ve read Moby-Dick three times. The first time was at the age of twenty-something and I thought that it was a very good book. I read it as an exciting story of a young man at sea, and I remember thinking that there were a lot of digressions that seemed to go on for a long time without actually contributing to the story. How many pages do I have to read about the color white? But a good book, nevertheless. I chalked up the digressions to Nineteenth-Century literary peccadillos.

The second reading came when I was in my thirties, and I got a lot more out of it. I realized that the exciting story was grafted on top of clarifying information and some great hints regarding human motivation.

I read it a third time in my late-fifties. This reading was in the Norton Critical Edition, and boy, it’s an amazing book. Half of the book is Moby-Dick; the other half is background information, contemporary articles about related subjects, reviews and criticism all through the intervening time, just a load of great stuff. On the third reading I realized that Moby-Dick is a profound meditation on the nature of human existence. That, and a terrific adventure story, and several other things in between.

The Ahab symbology is critically important. In a nutshell, Ahab had had an encounter with the white whale when he was a young man, and the event had cost him a leg. The experience had been terrifying in the extreme. Poor Ahab must have spent a rather considerable time sure that he was going to be killed that very day. Drowned and missing forever! Poor Ahab!

It was so terrifying, in fact, that ever since that day Ahab could think of nothing else but the white whale. Although he has stayed in the whaling business, and made captain, all of that is grafted on top of his hatred, and terror, of Moby-Dick. The trick is that this terrible fear does not cause him to spend his time at sea avoiding Moby-Dick; when he alerts the lookouts to keep an eye out for the white whale he does not mean to turn tail in the other direction if the whale is spotted. No, he wants to close with the whale for a second time!

The question, the philosophical and psychological question, is whether he is really interested in finally killing Moby-Dick. Is it all about Ahab’s rage? The strong hint is: no. He is probably only desperate for Moby-Dick to complete the job of killing him, killing Ahab. It’s about Ahab’s fear. You’ve got my leg! Take the rest of me, you seagoing-son-of-a-bitch! Get it over with! I’m tired of waiting!

It is a truism to say that literature has been examining human psychology very effectively since at least the days of Gilgamesh and his buddy Enkidu. What’s that? 3,500 years? Melville’s suggestion is that we may become so overcome with fear of a certain thing that we take concrete steps to hasten its arrival.

I would bet my teeth, my gums and my tattoo that this scenario actually pans out for many people. The very story arc of my life would be exhibit “A” for the proposition. I’m past the “climax” point in my version of the story. My white whale, with a lot of help from me, has laid me low.

All that’s left to be filled in on my Frytag’s Pyramid is the “catastrophe.” That comes in the last few pages. That would be when the whole ship is destroyed and everyone dies along with me. There are no nominees for the role of “Ismael.”

The moral of the story, dear reader, is that when you find yourself terrified of a certain eventuality, probably based upon prior exposure to the phenomenon, please avoid focusing on the terror in a manner that causes you to rush to greet it.

*Re: Ahab Ceely. In Melville's novel Captain Ahab has no family name. My understanding is that the surname Ceely was first used in “The Sea Beast,” the first movie version of Moby-Dick in 1926, a silent film starring John Barrymore. Rendered in the IMDB entry as “Ahab Ceeley.” The IMDB entry for “Moby-Dick,” (1931) simply says, “Ahab.” (Barrymore played Ahab in the 1931 movie as well.) On the Wikipedia pages for those movies it’s down as “Ahab Ceeley” once and "Ahab Ceely" once, and I’ve seen it without the final "e" elsewhere over the years. Most people wouldn’t notice the difference. At least they didn’t call him Ahab Sealy, like the mattresses.
Posted by fred c at 1:09 AM