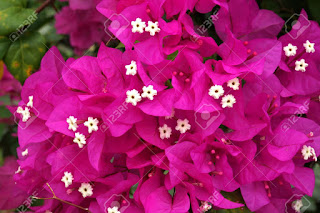 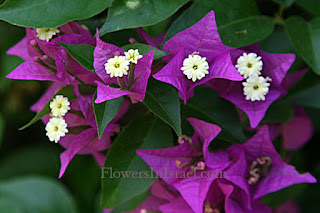 Bougainvillea are an entire genus of decorative plants that range from vines to bushes to trees. They can be very colorful. People like them!

The history of the bougainvillea is interesting, but not interesting enough to drag the reader through it willy-nilly. I will not address the socio-political history of the plant. I write because the subject came up recently and my resulting inquiry led me in a strange direction. Light was shed on the very methodology of nature itself, which is, let’s face it, endlessly fascinating.

I have always thought of bougainvillea as a flowering plant. That is true, but not in the way that immediately presents itself to the eye. I had never looked at one closely enough to see the actual flowers before last week. You can see them in the above photos; they are the tiny white things that are surrounded by red or purple “petals.” That’s the trick of it: what the casual observer takes for petals are actually leaves of the plant that have changed color to mimic large, more colorful flowers.

There is an obvious evolutionary purpose for them to have gained this power. The propagation cycle of the plant requires that bees visit the flowers, but the flowers are tiny and unobtrusive. Bees are drawn to displays of bright, vivid colors. That is the function of the flowers themselves on most plants. If you wear a bright yellow shirt to a picnic you may find out what I’m talking about. No bees, no propagation. Somehow, the bougainvillea began to change the color of certain of its leaves immediately surrounding the flowers to support the function of propagation. This is disturbing.

It is disturbing because it appears that conscious thought and effort would be required for that to be the case. “Conscious” is the operative word. How could such a mechanism come into being accidentally? This is why so many people are dubious about the entire concept of evolution. There was a perfectly good plant, but its flowers shrunk to nothing and were not serving well in their role. Something needed to be done, and voila! It was done. Something very unusual in the plant kingdom was done, or happened. Mother Nature is full of these little WTF moments.

We learn in general terms that evolution has been the driving force for the development of life on earth in its myriad forms over the eons. It works, we are told, chiefly through the mechanism of natural selection.

Consider the finches of the Galapagos Islands, often referred to as “Darwin’s finches.” The finches on different islands had different diets, and Darwin noticed that in a somewhat related event they also had very differently shaped beaks. If the food that presented itself on a certain island was quite light and insubstantial, like small insects or soft plant matter, the finches had smallish, equally insubstantial beaks. If, on the other hand, the food was made of sturdier stuff, like stout seeds or nuts, the beaks and the accompanying muscles of the finches were very sturdy and strong. Darwin realized that this was proof of the operation of evolution even in our own times.

The “consciousness” question applies here as well. It seems unlikely that something would just appear on its own. Mustn’t someone or something have gotten the idea and made the appropriate changes? Well, no, as it turns out. Natural selection works slowly, over time, and favors the natural variations that appear within a given species that would best serve the continuation of the species. So, if the food source of the island was moving in the direction of sturdier food stuffs, the finches that had sturdier beaks would get more nutrition and be in a better position to live longer and generate more offspring. The offspring would continue the trend with the stronger beaks, or at least the offspring with the stronger beaks would be more likely to thrive and propagate. Eventually, the finches on that island would all display the stronger beaks, which is just what Darwin observed.

Evolution is a murderously cold and efficient arbiter of life and death. The deaths just happen; there is no evil thought or act. It’s almost bureaucratic.

But how would that process play out with a flowering bush? As with the finches, genetic information would be passed along with the pollen and whatever of the plants. There would be the necessary opportunities for natural selection, for nature to line up the male and the female genes and chose one from column A and one from column B. Could there be a chromosome for leaves that were not green, but rather some other, brighter, more flamboyant color? Could the bees themselves have gotten involved in this process by gravitating to plants that had somehow come to display more colorful leaves in the vicinity of the flowers?

Very interesting, and even Mr. Spock would say, “fascinating.”

My friends, in these troubling times it would profit us greatly to become absorbed in problems like the one presented here, in order to prevent us from going mad contemplating the problems that are laying waste to our lives, our happiness, our political system, and the very earth upon which we live. Better by far to consider things in the realm of science, which are true and reasonable, rather than dashing our heads on the rocks of things like politics or religion, which are inherently unreasonable and not subject to the requirements of truth at all.

Perhaps mathematics would be suitably distracting!

Bonus Info: Evolution is working its magic on us right now, dear reader, on me and on you. In the entire modern human population, right now, our jaws are shrinking more rapidly than our teeth, and have been for a long time. Our diets, like the diets of the finches of Galapagos, are changing, and our food no longer requires the extensive grinding that was needed long ago. So our teeth have become a bit too big for our mouths. This means that our wisdom teeth have become a problematic bit of equipment. For some people, it’s a huge challenge to dental science. Look up “Celtic palette.” It seems like the Irish are the most evolutionarily advanced of all of the earth’s peoples!
Posted by fred c at 11:49 PM