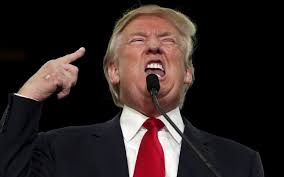 Democratic institutions have been a theme of mine. I recently wrote about the danger of weakening them or losing them, with the resulting loss of democracy itself. Watching Herr Professor Doktor and President Elect Donald Trump pick his cabinet this week was an object lesson in what I was talking about.

Not only his cabinet, but also the heads of some agencies. Those Federal Agencies are also democratic institutions. They are very powerful. They have the power of regulation over various aspects of commerce and national security. The rules that they promulgate have the power of law. They are at the center of any effort to move American democracy forward.

Does anyone think that this recent crop of appointees will do that? Does anyone believe that they will make decisions based upon the best interest of the American people? I certainly don't. I fact, I see them as having been hand-picked to destroy the very agencies that they have been appointed to head. Ben Carson at HUD? Ms. DeVos at Education? The Cabinet is just as bad. The CEO of Exxon, a Putin crony, as Secretary of State? Come on.

If Der Trump makes it through the next few months and actually completes a term in office, our democracy will have taken a huge hit. Don't forget that the Republicans are in charge of all of those states as well. Voter suppression and extreme Gerrymandering will continue; the Supreme Court will have been packed and it will back up the Republican agenda; regulations that insure fair business practices, worker safety, clean air and water, safe banking practices, etc, will have been gutted. There will have been more freedoms taken away, and more people senselessly incarcerated, and probably more wars senselessly started.  I could go on with this list as well, but you get the picture.

It's enough to make one nostalgic for the "election" of W. Bush. His installation also required behind the scenes shenanigans. He was an unmitigated disaster, too, but perhaps soon we will remember him fondly. I was predictably verklempt when he took office, and I made my feelings known. The typical response from family and friends was, don't worry, how bad can it be? Well, it was very, very bad. He took the Supreme Court to an existential tipping point, and he ruined the government's finances by cutting taxes on the top earners, and squandering trillions on endless, pointless wars and new weapons. He deregulated banks at just the wrong moment in history, leading to a world wide collapse in financial markets that is still reverberating. ("just the wrong moment . . ." because computers had become routine agents of stock trading, increasing the number of transactions exponentially and allowing the creation of new instruments to create essentially valueless new money.)  He cost us, the world, umpteen trillions of dollars, and all we got, as the saying goes, "was this lousy t-shirt!" (Well, that and a zoom-climb in budget deficits that added a trillion dollars or so to the national debt every year.) But W., for all of his mischief, did seem to observe cultural norms in most observable ways, he had limits. He did seem like he was "of this earth."

What we are looking at now is a strange breed of monsters. Not since the "Ohio Gang" has there been anything approaching them for breathtaking corruption and self-interest. And leading them is a creature that does not seem to possess any human characteristics at all. Our new president has no respect whatsoever for the ordinary processes of government, you know, the balance of power, compromise solutions, etc. In fact, he's already actively at war with the intelligence community, peremptorily attacking the courts and the congress, and interfering with long established foreign policy.  What will become of us? Porca miseria! Our new leader is Porco Dio!

I should stop now, before I actually have a heart attack.
Posted by fred c at 11:05 PM