A New Kind Of Hanging Out 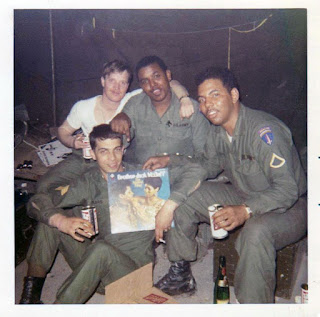 I copied this out of an article that was shared on Facebook: 20th Century Photos of People Holding Record Albums or something. This one spoke to me.

This was almost certainly taken in Vietnam in the late 1960s. I was in the service myself at the time, the U.S. Navy. Nothing fancy, just a deck-ape driving a pickup truck. These fellows look like they know each other pretty well, and they get along. Just knocking back a few Pabst's and Bud's, and listening to a little Brother Jack McDuff. This was pretty new stuff for the times. I don't have any pictures of myself, but I was in this situation many times.

I can tell you, a lot of black guys were surprised to find white guys that had interests in common with them and wanted to hang out. And a lot of white guys were surprised to find out that it was so easy to hang out with the black guys. A lot had changed after WWII, and it took some catching up with. It all seemed very natural to me, and these guys seem to have taken to it like ducks take to water. We might have been the first generation that could manage it so easily. Some of us, maybe many of us, but not all of us. I took some flack from the more reactionary white fellows, and guess who stood up for me? That's right. I remember everything, and I still appreciate it.

It's been a few steps forward and a couple of steps back since the 1960s, and I don't know if it's really any better now as far as race relations goes. Maybe a little bit better. I hope so. It's not so hard, you know. We all put our pants on one leg at a time (read: we all have jobs; families; friends; interests; bills to pay; troubles; successes). As Rodney King said so eloquently, "why can't we just get along?"
Posted by fred c at 6:29 AM