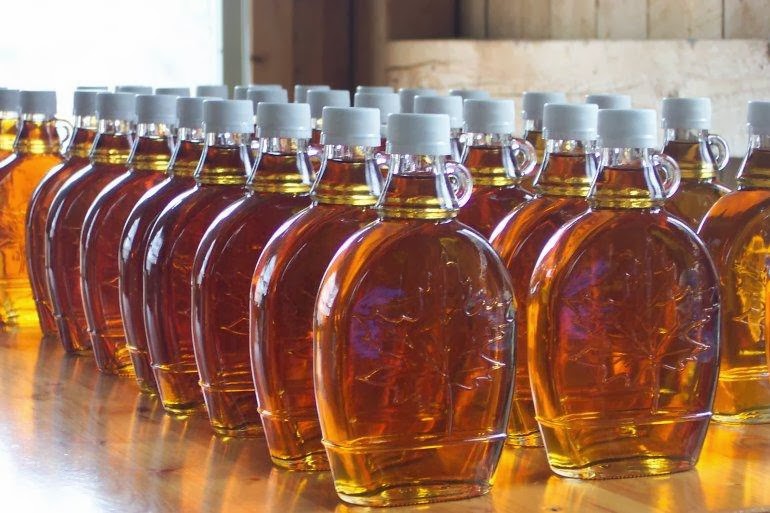 I never saw real maple syrup as a child, unless we were on vacation in the Adorandaks or Vermont or something.  Even then, I mostly just had a couple of pieces of maple sugar candy.  Later, I developed a taste for the syrup.

There was always real maple syrup in my house when my children were growing up.  It's always a little bit expensive, the real stuff, but it was an extravagance that we could afford.  After all, it's only a few bucks extra, a bottle lasts a good long time, and it's so much better than the sugary imitation "maple" syrup.  We made waffles or pancakes for a kind of family breakfast on the weekend, with the real maple syrup.  The kids loved it.

We were not rich, not by any means, but we were okay.  If we picked our spots, we could enjoy the best of a few things.  We always had real parmigiano reggiano cheese too.  That can be some real sticker shock if you look at the pound price, but the package that you buy is only four bucks or so and it lasts for a while.   That corporate imitation cheese in a can is so gross, I mean really, it's worse than the Aunt Jemima.

So I bought some maple syrup yesterday, Turkey Hill brand, from Quebec.  This is Asia, so there was no requirement to label it for grade or type, but it looks like "amber," and it might even be grade A.  It's packaged in a very graceful, disc shaped bottle with a small maple leaf well placed asymmetrically.  It was expensive, no surprise there.  Here in Bangkok this is a real luxury item.  533 Baht for 250 ml.  That's about sixteen dollars.  My father will probably disown me.  He used to come to the house and see the maple syrup and act like I was the most reckless spendthrift in history.  The reggiano, that he wouldn't even eat.  If we made Italian food he'd look at the pound price, say something that was both shocked and shocking, and put it back down.  He'd always made a good living, as his father did before him, but you can't completely take the Great Depression out of those who experienced it as children.

I got the maple syrup for a friend of mine.  Her father had loved pancakes and french toast and waffles, he was educated in Shanghai and with the war and all he was stuck there for a long, long time.  He developed a real taste for foreign food, like steak and potatoes, and the pancakes, etc.  After the war he returned to Thailand, got married to a nice Chinese woman, and had six kids.  The steak, that no one else in the house would touch.  Mom would cook for the family and he would cook for himself, often.  The kids loved the pancakes, etc, though.  They mostly had them with only honey.  Honey is popular and affordable in Thailand.  Thai people, most of them, don't eat butter, or at least they didn't back then.  My friend has never had maple syrup.  I didn't think that was fair.  Anybody who loves pancakes should have them with maple syrup (and butter, for that matter).

My friend has been practicing her pancakes.  It's all very nostalgic for her, her dad has been dead for some time now.  Bisquick pancakes!  A good sized box of Bisquick is about the same price here as it is in Los Angeles.  It'll be interesting to see what she thinks.  It's possible that she'll think it's too sweet, possible if not likely.  Who wouldn't love maple syrup?  We'll see, I guess.
Posted by fred c at 2:04 AM

Only Log Cabin in my parents' house. Only the real thing in ours, with my wife even making it a regular addition to Matson Brei (Jewish French Toast, with brown onions included). My grandparents would never be able to understand this addition, and would be rolling over if they could read this now.