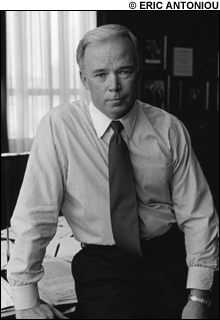 This is a picture of Patrick J. Purcell, the owner and publisher of the Boston Herald.  He has had a very, very successful career in the newspaper business, and this comes as no surprise to me.

We, Patty and I, grew up in the same little working class corner of Queens, we went to the same Catholic grammar school.  He was an all around great guy.

Even back then we could all see that he had leadership potential.  I was reminded of Patty the other day when the subject of informal baseball games came up on the "Memories of College Point" website.  These were "choose-up" games.  During the summer a lot of boys would show up spontaneously at the park with their gloves, ready to play baseball.  Two boys would be appointed team captains, they would then play some kind of contest to see who chose first, like throwing odd or even fingers (like rock, paper, scissors, but different), or catching a bat in the air and then seeing whose hand came out on top.  Then they would take turns picking their team.  Patty was frequently picked to captain one of the teams.  He was athletic, a good player, and he was a natural leader.  So, no surprise that he's made something of himself.

Patty, I hope you're doing good.  The wealthy and wise are in the public record, and I hope that the health is right up there too.  Live long and prosper, brother.  People remember you fondly.
Posted by fred c at 8:57 PM