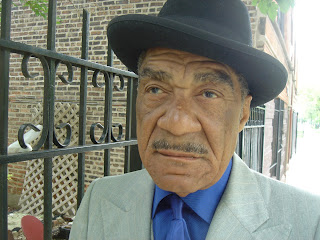 I love to find out that people that I really, really like are still walking with the living.  Andre was born in 1936, so it wasn't a sure thing.  I play the vid's on the 'Tube sometimes, but today I wondered: is Andre still drawing breath?  Delighted, I was, to discover that he is.

Andre has been active in the music biz since the 1950's.  He has written songs, produced hits, released records of his own, managed bands, he's an all-arounder.  I checked the Wiki, it's an acceptable source for pop-culture references, and evidently he hit a rough patch in the '80's, with the old devil intoxicants, don't you know.  Those were tough times, people still thought cocaine was good for you and the crack variety was rearing it's ugly head.  By the '90's, Andre was back big-time.  I discovered the new stuff on the old Napster, oh jeez, now I've done it, whenever I think about the real O.G. Napster I have to take a little break and compose myself.

And what a snappy dresser!  One of the best!  Check out his duds in the video for "Blame It On Obama." "Andre don't wear nothin' but fashion clothes," as he says in "The Black Godfather."

He has spent the last twenty years recording and touring with a huge number of younger, whiter bands, including The Compulsive Gamblers; The Sadies; The New Orleans Hellhounds; The Green Hornets; The Countdowns; and the Goldstars.  He's internationally known from coast to coast, he hits all the hot spots in North America and Europe.  It's great stuff, great shows.

Try an old song, like "Jail Bait," or the massively great "Bacon Fat," or maybe "The Monkey Speaks His Mind."  Or some of the newer material, like "The Black Godfather," "Agile, Mobile and Hostile," or "Bad Motherfucker."  Or just check below and hit "play" on "I Hate Ya."