The Scream, And The Yelling 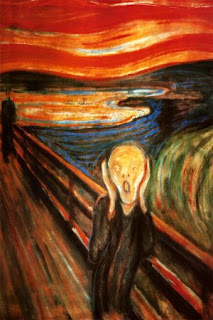 It's not so hot these days, so I've been sleeping with the windows open.  The other night, within a couple of hours after midnight, I was treated to a first-class, all-out scream, a woman's scream, nothing held back.  Think of Fay Wray in "King Kong."

I couldn't tell where it came from, but it was close.  I live in a twenty-story condo building, and there are big buildings nearby, so with the bouncing around the source of a sound can be hard to locate.  It could have come from my building, I wouldn't be surprised.  It could have been the building across the way.  It could have come from the whore house up the block, maybe some guy wanted something that wasn't on the menu and was willing to force the issue.  I don't think it was the whore house though, they tend to keep the windows closed and the air-con on.

The scream was followed by protracted, loud, angry yelling by a man.  I couldn't tell what he was talking about, he was speaking Thai and the words weren't clear in any case, but he went on and on and boy, was he furious.

Ah, the joys of urban life!  I was waiting for the gun shots, but that didn't happen, not this time.

Email ThisBlogThis!Share to TwitterShare to FacebookShare to Pinterest
Labels: The Art Of Screaming