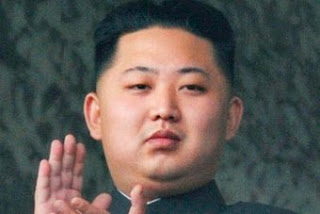 Some people consider me to be fairly intelligent, and honestly I join with them in considering myself to be so endowed.  But I can be a bit slow people, slow I tell you, slow.

There was Kim Il Sung, the Great Leader, followed by Kim Jong Il, the Dear Leader, and now we have Kim Jong Un, I don't know what they call him, maybe the "New Leader."  This is the new site devoted to pictures of him looking at things.

It does make sense that "Kim Jong Il Looking At Things" is moribund, after all the man has been dead for years.  There were so many pictures of him looking at things that the site was still posting new ones up to about a month or so ago.  Today, finally, it occurred to me that maybe, just maybe, the site-masters had moved on and that by now there might be a wealth of pictures of Kim Jong Un, the new boss, looking at things in the same propagandistic manner that his dad had looked at things for so many years, on such a frighteningly regular basis.

So let's see what Junior's style is.  And let's see if the lackeys are as obviously terrified of him as they were of his dad.  It's all fun, all the time in North Korea.  As long as you don't have to live there.
Posted by fred c at 7:25 AM