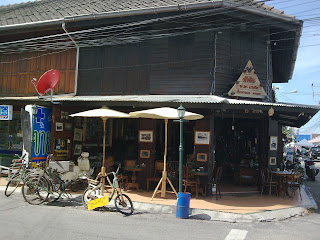 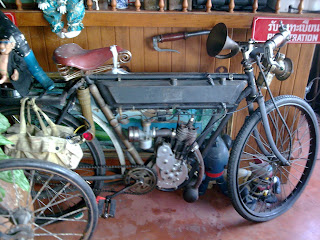 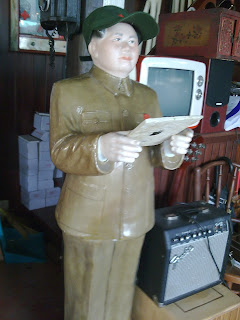 You come across places like this frequently in Thailand.  A coffee shop, or a restaurant, packed to the gills with antiques.  There must be a person in the family that owns the business who loves old things, my hunch is that they are all personal collections.  There may have been a commercial motivation, a thinking that it might enhance the appeal of the place, but more likely it was somebody's love of the things themselves.

Once the whole collecting thing gets rolling, local people will donate old stuff to the cause.  They know that the owner, their friend, loves the things and they know that if they give stuff to him he will value it and take care of it.  I say "him," I think it's more often men who get the bug for collecting stuff that most women would call junk.

Like I say, people donate a lot of the stuff.  The owner here told me that the ancient motorcycle, for instance, was given to the shop by someone in town.  She knows that it's valuable, she told me that she had turned down 100,000 Baht for it ($3,000).  I think she's right, I watch those shows on TV and I think it's worth quite a bit more than that.

This shop was full of Mao images and figures, like this nice Mao holding an I-Pad.  Another of the owners interests, I'd reckon.
Posted by fred c at 12:51 AM

Email ThisBlogThis!Share to TwitterShare to FacebookShare to Pinterest
Labels: Antique Collecting In Thailand