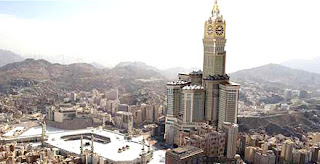 Someone thought it was a good idea to build this thing right next to the Grand Mosque of the Kabba in Mecca, the holiest site in the holiest city of Islam.  I'm pretty sure that it wasn't built by trolls who wished to destroy the credibility of official Islam, although it might have been.

It's bigger than the Empire State Building, bigger than the Petronas Towers.  It's fun to read about it, you should go and check out some sites.  There's a very interesting tension between Muslims who think it is a blight on the landscape and an affront to Islam on one hand, and Muslims who think it is a beautiful expression of Islamic culture in general and Arab culture in particular on the other.  The comments, and the back and forth, are fascinating.

Mecca is a closed city and most Westerners don't even know that this thing exists.  I came across it by accident reading up on the subject of skyscrapers in general.  One site that I read went into detail about a quote from the received literature of Islam that holds that the sure sign of the end times will be that Arabs will compete with each other to build tall buildings.  That alone would be worth the trip to Professor Google's library.

I may have written about this before.  If that is found to be true, I will claim to have been in shock when writing the first piece.
Posted by fred c at 6:45 PM

Email ThisBlogThis!Share to TwitterShare to FacebookShare to Pinterest
Labels: Architecture, The Edifice Complex