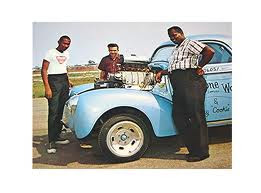 The low-brow spheres were the site of a lot of racial progress in early Civil Rights Era America. Rock and Roll gets all the play, but there was some good right-mindedness going on in drag racing too.

The Stone/Woods/Cook team was the first successful interracial drag racing outfit, and wildly successful they were. Tim Woods and Fred Stone were Black car freaks in Los Angeles, and they built some of the most successful cars of the Sixties. Doug Cook was their driver, a transplanted Southerner who had awakened from his Jim Crow background after a few years in Los Angeles. Their blown gas coupes destroyed the competition.

Tim Woods must have been really something. He had a big construction company, and he really loved his vehicles. He'd had a habit of buying Oldsmobiles and immediately dropping Cadillac engines in them, Cadillac engines were the bomb in the Thirties, Forties and Fifties. Building dedicated race cars must have seemed like a natural progression, once he had a couple of bucks to play around with. The So-Cal drag scene was admirably tolerant of diversity: if you were a hard charger you got respect and no hard time. Later on the team went national, and they had to be more careful when they went to the Southeast. Tim and Fred stayed away, and Doug Cook took a lot of shit for being a race-traitor.

They weren't alone in carrying the flag, there were other Black drag racing heroes. Malcolm Durham helped to create the funny-car phenomenon. Big Willie Robinson was another L.A. guy. He started the International Brotherhood of Street Racers and worked with the L.A. police to get a handle on the street racing "problem." They started by blocking off streets to have events (with police cooperation), and finally the city leased him a site on Terminal Island for a dollar a year to start the Brotherhood International Raceway. Run what ya' brung!

The music was a big deal for me, an important part of my development, showing me Black and White faces together. I had Black heroes in sports and music in the Fifties. I'm sure that I also prospered from seeing Stone, Woods and Cook in my subscription copy of Hot Rod magazine every month during the early Sixties, my high-school years. Smiling broadly, hugging each other, and kicking ass and taking names.

I just wanted to take a minute to appreciate their efforts here in Black History Month.
Posted by fred c at 9:56 AM

I am a young builder and really enjoyed this monster piece of history.