On The Road With Khun Fred 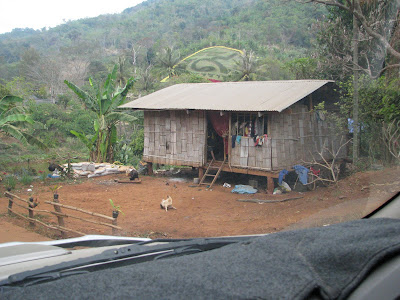 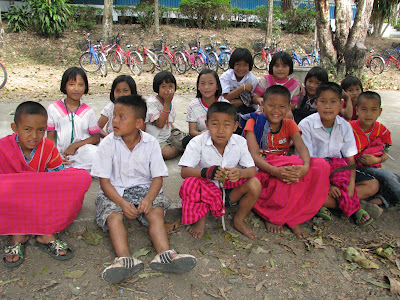 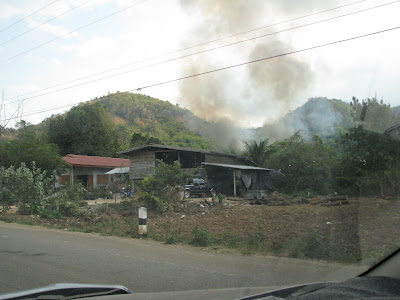 I was in Uthai Tani over the weekend as a guest of my friend Suksa. Nice guy, nice family, pix to follow. We went up to a "hill tribe" area for a visit. In this area, they are Karen, a tribe mostly associated with Burma. Suksa tells me that hereabouts they are full Thai citizens; closer to the border that is not the case.

("Karen," it took me years to figure out what Thais were talking about. It sounds like "gah-lee-yen." A lot of that happens to me.)

We stopped at a school. We missed out on visiting a class, school was over when we got there, but I did get to hang out with these kids for a bit. When I walk over to them they always get this "what next?" look. I crack the ice by asking them in Thai, "krai poot passa yeruman dai, na c'ap?" ("Who can speak German?") That's two surprises in one, I can speak Thai and the German thing, nobody can speak German over here, almost nobody. So this little crowd developed and we had some fun.

Finally a child asked me where I was from, and when I said America he said, "so why were you asking about German?" Oh, I told him, I can speak German too. "Why do you speak German?" I learned it at university. I got that look, like Farang do the damnedest things. I doubt if they could find Germany on a map, but they know it's a country, separate from America.

The small house is a typical Karen house, there were a lot of them around. The group of dwellings with the fire out back, that could be one of two things. Either they were burning off the stalks from something recently harvested, or they were burning off some forest for new planting. Fire is an important tool for them, and kind of fun too. The government doesn't like it, but people have to make a living. As long as they don't burn too much, it's cool.
Posted by fred c at 8:21 PM