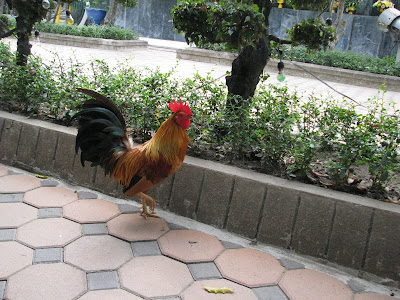 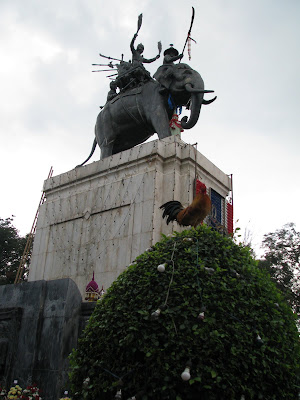 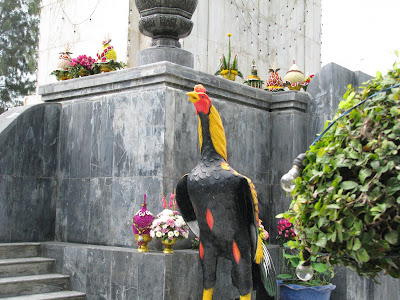 The statue of the fellow on the elephant, that's King Naresuwan, a real big-shot from about seven hundred years ago. United the kingdom of Siam, he did, and came up with a new Thai alphabet that is still in use today. Now notice the chicken in the tree, standing right up there like he owned it.

How'd he get up there? He flew, probably. They fly like who-done-what-and-ran, and only briefly, but they can do it. Usually it's because a dog or something is closing in on them.

That's our chicken walking around in the other picture. Handsome little guy he is, too.

Chickens happen to be a totem of King Naresuwan. The big, black chicken statue is part of that trip. The young Naresuwan was a royal hostage in Burma as a boy, and he and the Burmese prince had fighting chickens. The battle of the chickens presaged their later battle with large armies. The battle culminated in an elephant duel between the two kings, and the Burmese king was killed, ending the battle and the war.

I almost called this post "King Naresuwan's Fighting Cock," but finally I thought it was too suggestive.

There is a series of movies in Thailand about the exploits of King Naresuwan, it's like "Naresuwan I," "Naresuwan II," etc, I think they're up to four with five planed. They're good movies, but I doubt if they're available in America. Check your Netflix! If you can catch one, consider how amazing it is that they got such huge looking, glossy costume dramas done on such small budgets.
Posted by fred c at 5:09 AM