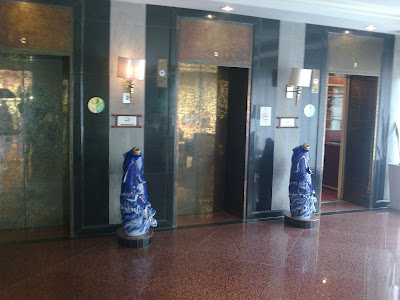 I taught a class in Hat Yai this weekend, and the Regency is where we get our discount. Every little bit helps.

These are the lobby elevators. I walked over to them and it was a minute or two before I found the call buttons. I thought about asking the guy at the door, but I thought that would make me look ridiculous. I considered sitting down where I had a good view and waiting for someone else to come over, maybe see them push a button. Then I thought, I can't let this thing beat me! It has to be here! I stood back, and before long I realized that the buttons were in the snouts of the mythical creatures.

Not a bad hotel, not expensive (eighteen dollars or so, 800 Baht). Good, free breakfast. TV had Fox News, the SyFy Channel, Al Jezeera, NHK, the Universal Channel and Star Sports, that was it for English but that's pretty good. All a little bit down in heel, but you can see that it was really special when it was new, marble bathroom and all.
Posted by fred c at 1:04 AM