Not A Restaurant Review: House Of Some Ants 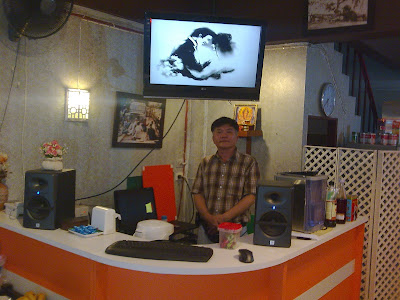 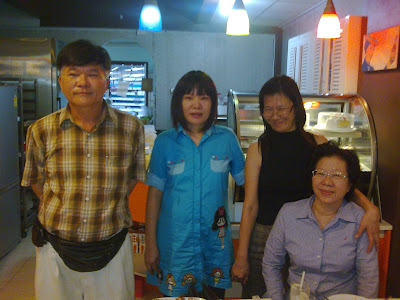 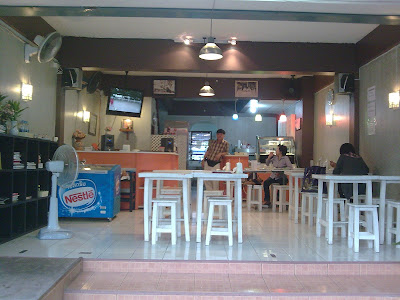 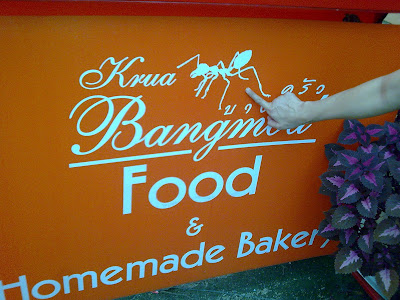 I doubt if anyone in America would ever name a restaurant "House of Some Ants," but that's sure enough the name of this place. It's in Thonburi, a western approach to Bangkok. It's the restaurant of my friend Lo and his wife, that's him in the pictures. The women are his sisters, we were on a good will visit, it's a new place. I neglected to get his wife into the pictures. I neglected to bring a camera at all, these pix were taken with my phone. "Never prepared," that's my motto.

But the ants thing. I thought that it was a little strange, but I've learned to expect the unexpected. When we were leaving, while we were driving along the main drag of Thonburi, I noticed a giant statue of an ant at an intersection. Turns out that the ant is the symbol of Thonburi. Talking about this, I discovered that Thai people have almost limitless respect for the lowly ant. The ant is strong beyond imagining for its size; the ant is small but through cooperation it can accomplish great things. All true, I suppose, but in America we don't see it so heroically.

The food was really good by the way. Totally cheap, it's a small neighborhood place after all. Lo's wife is a dedicated cake baker, she's had an oven in her house for many years to pursue what was her hobby. They have a cook too, a nice woman who worked for twenty years cooking in hotels, she even speaks English (to some degree). Lo still has his day job, he's a computer guy. The restaurant was his wife's idea, and like a good husband he said, "yes, dear!" On this visit, in the pastry case, they had a white cake with fresh whipped cream and a Boston Creme Pie. Both were really delicious. We had five or six plates of Thai food too, all better than average.
Posted by fred c at 3:09 AM

The top picture is Lo behind his desk/counter. Like I say, he's a computer guy, so the TV has an Internet hookup too, the key-board is available for people to type in their YouTube requests. Check the pix behind him. Above the screen to the right is a photo of the King firing an M-16; below and two the left is a photo of the King talking to people on a railway bridge; on the right side is an image of Oh! it just skipped my mind! the Indian multi-armed, elephant headed god of good luck in business, it'll come to me.