The Site Is Called Pee-Mai, But Don't Ask Me What It Means 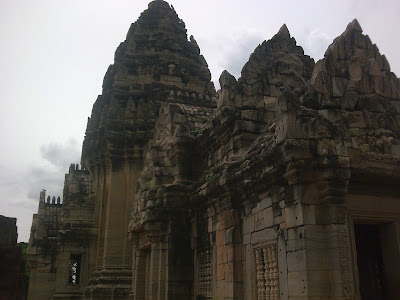 Went out teaching to a place that is variously called "Korat" or "Nakorn Rachasima," out in Isan. This is a thousand year old ruin of a temple built by the then-ascendant Cambodian kingdom. It's one of those all-religions-at-once temples, with elements of Buddhism, Hinduism, Animism, that Rama Cycle stuff with the monkey warriors, and some straightforward penis/vagina worship ("lingus" and "yoni") I had to take a shitty little bus fifty kilometers outside of the provincial capitol, but I was feeling adventurous. It went fine, as always.

The nearby museum was very nice, good signage in English and Thai. They couldn't say what "Pee-Mai" meant, though, beyond saying that it meant the same thing as "Viyanand," whatever that means.

Lunch was delicious. Thirty Baht (a dollar). A big plate of chicken and rice (the rice cooked in chicken soup, a special thing).
Posted by fred c at 5:05 AM