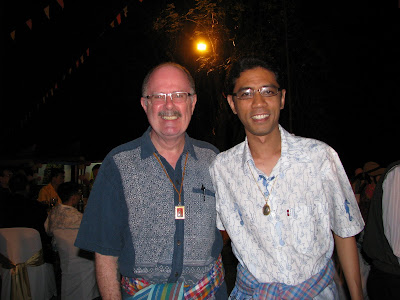 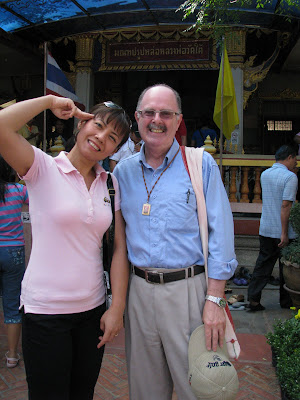 Thailand is predominantly Buddhist, but there are lots of Muslims too. The largest numbers are in the old peninsula trading centers, Phuket island, Songkla, Nakorn Si Tammarat, the south; there's a large Muslim community in BKK, and my neighborhood is the main location. But there are Muslims all over Thailand.


These two friends of mine in the pictures are Muslim. Khun Anchuda illustrates an interesting point: not all Thai Muslim women dress the same. There's a wide range of dress, from standard modern, like Anchuda, through head-scarf to completely veiled. Men, too. Ajan (Prof) Apichai is typical, nothing in his dress identifies him as a Muslim, but some guys wear the beards, and little hats, and man-dresses.

It was interesting to me that in both cases, other Thai's were quick to tell me with a smile, he (she) is Muslim! If there's any discrimination, I don't see it.

In the deep south, adjacent to Malaysia, there's some political violence, and the disgruntled population is Muslim, but it's not a Muslim problem. They speak Malay and are culturally Malay, the area was part of Malaysia until about a hundred years ago. There's very high unemployment among the Malay speaking population. That's the source of the problems.

Thai's are pretty level headed about religion. If you're a good person, and play the smile game, it's all good.
Posted by fred c at 5:19 PM