Light And Sound Show At The Bridge On The River Kwai 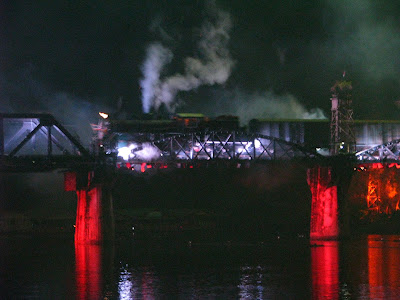 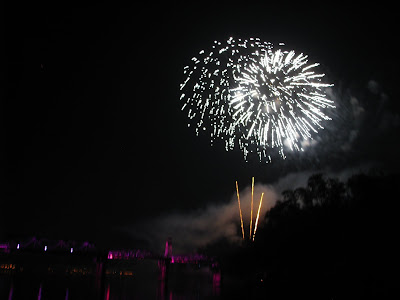 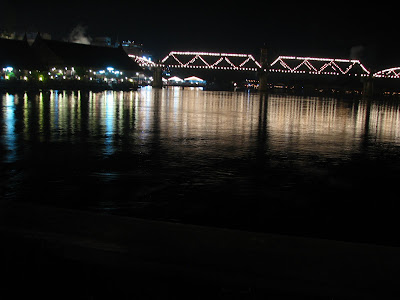 The show started off with a birthday salute to the King, it was his birthday, December 5th. There were thousands of people on both sides of the river and we all sang two "King" songs. Then the show, with the theme of the years of Japanese occupation and the building of the bridge and the associated railway.
The show culminated with a huge mock air-raid, complete with searchlights in the sky, a Japanese patrol boat in the river, and squibs all around to show bomb blasts in the river. One poor "stunt-man" was set on fire, ran half way across the bridge, then jumped into the river. A couple of sound clips from the movie "Bridge on the River Kwai" were played, and then a silent moment with the playing of taps accompanied by the release of twelve Thai "fire balloons." The Japanese wished to keep the Thai's happy, so they tried to make the whole experience easy for the local population, prefering to import slave labor from neighboring Burma, Malaysia and Indonesia, but it was still a hardship for the Thai's, as was the entire experience of the war.
The steam locomotive may have been a surviving Japanese vehicle, along with a few period rail cars.
I was pretty lucky to catch this show, it's only put on ten days every year. Thanks again to my university, Ramkhamhaeng. This trip was a seminar weekend for the Faculty of Law. I have the best job in Thailand, and I know it.

Your pics brought this to mind