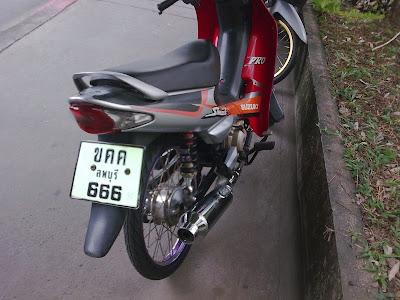 In America a motorcycle with this license plate would be the worst of luck in most social circles. In Thailand, though, it is a "nine," as in, six plus six plus six is eighteen, which adds up to nine, and nine is the lucky number, so this license plate is a blessing, very auspicious and lucky. My own motorcycle is lucky, license number 810, a nine.
Seven is lucky in America, and thirteen is unlucky; eight is lucky in China. Nine is lucky in Thailand because the current King has really been good luck for the country and he's Rama the Ninth. I'll be that there are countries in which any number that you can think of is lucky, or otherwise. So they're all lucky, I guess.
Posted by fred c at 2:47 AM