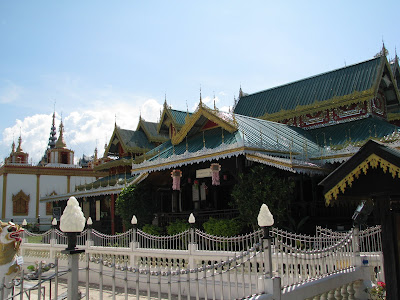 Mae Hong Son is an interesting place. As many people speak Burmese as Thai, the Thai's mostly speak the Northern dialect of Thai, the place is full of various hill tribes who have their own languages, and there's a good sprinkling of Chinese speakers as well. The polyglot of signage is impressive. Lots of NGO's in town, most of the Burmese and hill tribe people are stateless refugees.
This is the big Burmese temple, most of the monks here are Burmese, or Burmese-Thai. They have a nice museum, pix to follow.
Posted by fred c at 5:33 PM