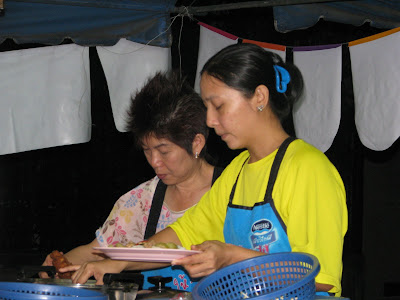 The shorter woman with the hip haircut was the owner of the food shop; the woman in the yellow shirt was the helper. This is in my old neighborhood, the picture was taken a year ago.
The owner sold the shop around that time. She sells insurance now, and I still talk to her occasionally. Her English is very good, before the shop she was an English teacher in state grammar schools. She's smart, and I value her advice. She's married, I never get ideas about married women, and they know it. No sense in ruining people's happiness, or getting murdered. I hope that her husband knows how wonderful she is.
The helper is Burmese, some kind of refugee (even if it is "only" economic). Her life has been unremittingly hard. She's also a smart woman, and pretty wonderful herself. Nice looking, in a slightly commercial, sturdy kind of way. She's always cheerful, her Thai is very good, her English is ok too for that matter, and she studies. Her eyes had that feint hint of panic that you can see in people who have seen and/or undergone too much.
I know that I can trust the owner to take care of herself. Maybe I'll think up an insurance question as a pretext to call her next week. The helper? I can't really ask the owner about her, she might get the wrong idea. I can only hope that the helper came down on her feet after the shop closed.
Posted by fred c at 5:15 AM