A Touristic Interlude In Sukhothai 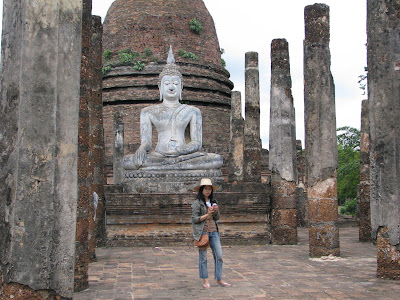 When Thais refer to something as “ancient,” it may be anything from two hundred to some thousands of years old. The “ancient” capitol of Thailand at Sukhothai was ascendant during the thirteenth century, which in Europe was a rock’s throw before the Black Death, which in turn immediately preceded the Renaissance. The city is surrounded by a huge flat area of what is literally the greatest farm land in the world, now devoted mostly to rice, with the odd bits devoted to fruit orchards, all laced by rivers that are clogged with fish. It’s no surprise that the place was prosperous. In fact, it still is prosperous.

I was paid to go up and teach a class on Sunday, and I decided to make a tour of it. I wasn’t disappointed. I’d recommend it to anybody. Anybody, that is, who is naturally tolerant of searing, brutal, hyper-tropical heat. Sukhothai is famous even in Thailand as a really, really hot place; even Thais tell you in all seriousness that it is like dangerously hot there. I can tell you that it was hot enough this week to make you bandy-legged and delirious. And this was with heavy cloud cover and some rain from an early-arriving rainy season.

I know that it’s low-season, but the place was unnaturally empty. All of this “Yellow-Shirt/Red Shirt” street protesting stuff has really cut the tourist crowds. My very nice, deeply-discounted resort was a ghost town. It’s a shame, because Thailand is still a safe place, fun and cheap, a tourist paradise, that’s without a trace of sarcasm.

I’m afraid June may turn out to be Sukhothai Month on Spin Easy Time, because I have some decent pix with accompanying stories worth telling. So bear with me.
Posted by fred c at 7:25 AM